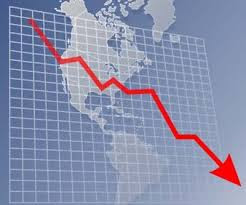 Call it a non-recovery.

Since the alleged economic recovery began in mid-2009, annual economic growth has hovered around 2%, well short of the nation’s historical average of 3.3%. In fact, the US economy has not surpassed 3% annual growth since 2005.

So, for a decade, the US economy has lagged its long term norm.

Yet, this slowdown is just part of a longer term decline.

However, since 1973, the economy has experienced slower growth, averaging just 2.7% annually.

Here are the top five years of GDP growth since 1948:

As you can see, four of the five best years came in the 1950s, and the other occurred 31 years ago.

Though the economy had already been in long term decline for over three decades, the growth rate has slowed quite considerably in the years since the 2008 financial crisis and subsequent Great Recession.

In response to the crisis, which nearly sank the US economy, the Federal Reserve took some rather drastic actions.

First, it lowered the Federal Funds Rate (essentially an overnight lending rate for banks) to a range of 0% to 0.25%. This has allowed banks and large corporations to borrow very cheaply for the past seven years. In fact, for the Big Banks, money has been essentially free at times.

In the process, the Fed’s balance sheet has increased rather significantly, rising from $869 billion in August, 2007 to $4.5 trillion today. That's a 450% increase in just eight years.

Yet, all of these absolutely massive Federal Reserve stimulus programs, which were intended to re-inflate the economy, have barely made a difference.

Here’s a look at the last eight years of US economic growth, according to the World Bank:

This continued weakness, coupled with stagnant wages and incomes, has lowered the standards of living for millions of Americans.

The US economy is driven by consumer spending, which accounts for roughly 70% of GDP. Yet, consumers are in no position to be the engine that brings this economy roaring back to life.

Household incomes are the same now as they were in 1995, after you adjust for inflation. That means that the typical American family isn’t any better off now than 20 years ago.

Average household debt, though below pre-Great Recession levels, is much higher than it was three decades ago.

According to the Federal Reserve’s Survey of Consumer Finances, after adjusting for inflation, the amount of debt held by the average family nearly doubled from $47,356 in 1989 to $91,114 in 2013.

Additionally, household debt as a share of GDP has increased by roughly 20 percentage points over that same time period, from around 60 percent in 1989 to just above 80 percent in 2013.

But, with a national debt in excess of $18 trillion, further deficit spending is no longer a reasonable option (and it wasn’t many trillions ago either).

As it stands, debt growth is outpacing economic growth. That’s a terrible, and unsustainable, situation.

The federal budget deficit for fiscal 2015 (which ends Sept. 30) is expected to drop to roughly $425 billion, according to a report released last month by the nonpartisan Congressional Budget Office (CBO).

If so, it would be a seven-year low for the government’s annual budget shortfalls.

If this year's lower deficit sounds like good news to you, ask yourself why $425 billion in deficit-spending in a single year can be considered good news.

Our economy is entirely reliant on debt to keep functioning.

Since all money is loaned into existence, money equals debt. The economy cannot grow without an expansion of debt, meaning that debts can never be fully retired. If debt isn’t accumulating, then money isn't being created and the whole system locks up and shuts down.

And therein lies the problem: Ours is a debt-based economy, and without continually expanding debt at all levels — consumer, corporate and government — there can be no return to what was once viewed as "normal."

In short, there can be no economic growth without debt.

It’s quite likely that without all of the government’s continual deficit spending, we’d be in the midst of a long term depression.

Advanced economies are mature economies, and are therefore harder to grow. The hard reality is that the low growth rates of last eight years are likely just the beginning of a longer-term period of lower, perhaps even zero, growth.

The Federal Reserve has undertaken massive, extraordinary, and rather drastic measures to get the economy out of recession and resume vigorous growth.

Yet, their nearly seven-year efforts have largely failed, and that is a troubling reality.

We are witnessing the limits of monetary policy. This is the best that it can do.
Posted by The Independent Report at 12:38 PM