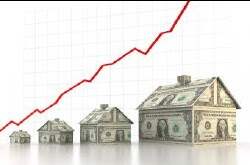 The federal funds rate is, perhaps, the most important benchmark in financial markets. This interest rate is used as a regulatory tool to control how freely the U.S. economy operates.

The funds rate is the interest rate banks charge each other for overnight loans. When the federal funds rate increases, it becomes more expensive for banks to borrow from other banks. Those higher costs are typically passed on to consumers in the form of higher interest rates on lines of credit, auto loans and, to some extent, mortgages.

The funds rate was raised to an all-time high of 20 percent in 1980 and 1981 to combat double-digit inflation.

In response, the average 30-year fixed-mortgage rate in 1981 reached an all-time high of 16.63 percent. Consider that for a moment; such an extraordinary rate was paid by some of our parents back then, which is unimaginable today.

Mortgage rates continually fell over the ensuing years, finally dropping into the single digits in 1991, and finished the decade at around 7 percent. The downward trajectory continued in the 2000s, when rates dipped as low as 5 percent, which of course sparked the housing bubble and resulting Great Recession.

The Federal Reserve cut the funds rate to an all-time low of 0-0.25 percent on December 17, 2008, in response to the financial crisis. Before this, the lowest federal funds rate had ever been was 1.0 percent in 2003, to combat the 2001 recession.

The Fed didn't raise the funds rate until December 2015 -- an extraordinary span of seven years. The central bank subsequently raised the funds rate once in 2016 and three times in 2017. The Fed has, so far, raised its benchmark rate twice in 2018 (March and June), and noted that two more rate hikes are appropriate this year.

At its June meeting, the Federal Open Market Committee set the funds rate to a range of 1.75-2.00 percent. As of August 30, the federal funds rate was 1.92 percent.

So, how has the series of rate hikes since 2015 affected mortgage rates?

In 2012, the average 30-year fixed-mortgage rate was 3.66 percent, the lowest annual average on record, according to Freddie Mac.

The trend is clear: mortgage rates are steadily rising, right along with the funds rate.

A little history, according to Freddie Mac:

Though mortgage rates are still historically low, they have been steadily rising since 2016, after the Fed began raising the funds rate.

Historically, mortgage rates can affect home prices, with an inverse relationship. As rates rise, prices may fall. Conversely, as rates fall, prices may rise. Low interest rates make money cheap. The lower cost of borrowing allows people to purchase more expensive homes. Realtors (and, consequently, home sellers) understand this and jack up prices to meet the capacity of the market.

Though incremental changes to mortgage rates may not affect home prices very much, rising rates over a longer period can result in weaker demand. Less competition for homes can, in turn, lower prices or, at the least, moderate price growth.

Of course, inventory affects prices (supply and demand) and the market has been tight in recent years. Simply put, there have been more buyers than sellers, so demand has outstripped supply. Consequently, after declining for a few years in the aftermath of the crash, home prices have climbed back above the levels they were before the bubble began to burst in 2006.

Interestingly, mortgage rates and home prices have been rising in tandem over the past couple of years. Yet, rates are still remarkably low by historical standards. Remember, back in 2000, the average 30-year fixed-mortgage rate was 8.05 percent. In essence, the present rate would have to double to climb back above that figure once again.

So, incrementally rising rates may not be enough to push down home prices. For that to occur, a lot more supply will have to come onto the market, something that doesn’t appear likely any time soon.
Posted by The Independent Report at 11:59 AM No comments: Links to this post