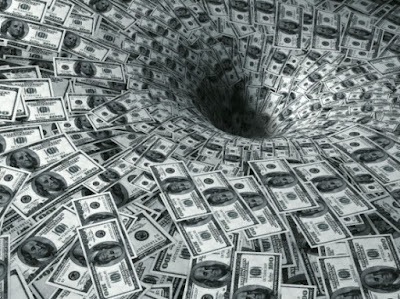 Debt levels around the world are absolutely enormous. This is particularly troubling because these massive levels of debt are choking off economic growth.

Borrowing money to pay for something today leaves less available money for future purchases. Of course, there’s also the matter of interest, which makes whatever you’re borrowing for today more expensive in the long run.

There is presently less money to pay for today’s needs due to the cost of servicing our past debts. This applies to both households and governments. Debt payments for past spending leave less money to spend on the things we would like to purchase today. In a manner of speaking, debt steals from the future.

For example, last year the federal government spent $402 billion on debt service, according to the Treasury Dept. That money was used to cover past spending and could not be utilized for things such as infrastructure spending this year. Infrastructure ultimately increases economic activity and pays for itself in the long run.

Debt that allows for an increase in productivity and/or income is useful when it is easily serviced. For example, education or infrastructure not only generally pay for themselves, but allow for even greater income-generating capacity.

Simply put, debt that ultimately generates more than enough cash flow to repay itself is productive.

Unnecessary or redundant military spending (including fighting our recent wars) or providing tax breaks to highly profitable industries are examples of non-productive debt. They do not add to add to the productive capacity of the economy, much less pay for themselves.

The U.S. national debt has now reached $19.4 trillion and will surpass $20 trillion next year. But the U.S. government is not unique or alone when it comes to debt.

Though excessive debt sparked the worst global financial and economic meltdown since the Great Depression in the fall of 2008, quite incredibly, overall world debt is even bigger today than it was then.

The next recession — and we all know it’s coming because they always do — will make servicing those huge debts crippling or impossible, which would set off a domino effect of global defaults.

However, government debt is just one portion (albeit a huge one) of the total global debt pie. When household, corporate and bank debt are added to the tally, the total sum reached a staggering $199 trillion in mid-2014, amounting to a 40 percent increase in just seven years, according to a study last year by McKinsey Global Institute.

The overall effect has been to stifle growth rather than promote it.

The sum and rapid expansion of global debt are stunning. Debt caused the crisis in 2008, yet it’s now significantly larger. In fact, government debt has doubled — and this has occurred during a time of alleged austerity.

Not only does debt service rob from more productive uses, it also results in more debt-spending to pay for budget items that can’t be covered due to debt service. It’s a vicious cycle.

The GDP numbers don’t lie: global growth has slowed to an anemic rate and all of this debt is a direct causation.

You can’t help but think this will not end well.

As BlackRock’s Jeffrey Rosenberg told the L.A. Times, some kind of global debt blowup has occurred roughly every seven or eight years since the early 1980s. That means 2016 would be right on schedule.

That’s a scary notion, and it does indeed seem that we’re continually creeping closer to the precipice.

The central banks are owned by private banks, whose mission is to indebted others — particularly sovereign nations, since they are the biggest borrowers. These bankers want perpetual debt that can never be paid off. It seems they have finally achieved that goal.

“China’s total debt has nearly quadrupled, rising to $28 trillion by mid-2014, from $7 trillion in 2007,” wrote McKinsey. “At 282 percent of GDP, China’s debt as a share of GDP is larger than that of the United States or Germany."

McKinsey went on to say the following:

Rather than reducing indebtedness, or deleveraging, all major economies today have higher levels of borrowing relative to GDP than they did in 2007.

Debt-to-GDP ratios have risen in all 22 advanced economies in the sample, by more than 50 percentage points in many cases.

Government debt in some countries has reached such high levels that new ways will be needed to reduce it.

As the L.A. Times recently noted, “The concept of a modern debt jubilee [wiping out borrowers’ debts] has been finding its way into some mainstream financial market discussions.”

What would that do to the global financial system? Could it cause a total implosion? When debt goes away money goes away, since money is debt.

Only in the core crisis countries—Ireland, Spain, the United Kingdom, and the United States—have households deleveraged. In many others, household debt-to-income ratios have continued to rise. They exceed the peak levels in the crisis countries before 2008 in some cases, including such advanced economies as Australia, Canada, Denmark, Sweden, and the Netherlands, as well as Malaysia, South Korea, and Thailand.

Much, if not most, of that debt is non-productive. It is just a ball and chain, and the world now finds itself in rapidly rising waters.

U.S. household debt has risen for seven consecutive quarters and it won't be long before we reach a new peak.

Although household debt relative to GDP is still below the 2008 level (for now), it remains higher than it was in almost all of postwar history.

All debts must eventually be reconciled. There is a reckoning coming, and it will likely arrive sooner than later.

Brace yourself.
Posted by The Independent Report at 4:17 PM No comments: