The Cost of War & Our Military Empire 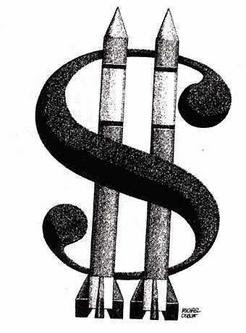 While America debates how soon we can bring our troops home from Iraq, it's worth noting that -- more than 60 years after the end of WWII -- the US still has more than 50,000 troops in Germany and 30,000 in Japan.

It makes you wonder, as Ron Paul asks, in this time of deep economic crisis, why not just bring them all home?

Defense spending is the third largest expense in the federal budget. Only Medicare-Medicaid ($739b), and Social Security ($700b) are bigger.

According to the Stockholm International Peace Research Institute, this year, the Pentagon will spend $607 billion for its day-to-day operations. Winslow Wheeler, a sharp-eyed bean counter at the Government Accountability Office and the Senate Budget Committee before joining the Center for Defense Information, a Washington think tank, puts the figure at $609 billion.

Either way, the figure is more than the total combined military spending of every other country in the world. Put another way, the spending amounts to $1.2 million per minute, or $1.7 billion per day.

But the defense budget didn't include supplemental requests to fund the wars in Iraq and Afghanistan. The White House later asked Congress for $70 billion in supplemental war funding. Requesting the funding in installments allowed the White to avoid revealing the true costs of the wars.

Money for the Energy Department to work on the nation’s nuclear arsenal, the Selective Service, Homeland Security, healthcare for war veterans, and other defense-related spending pushes the total far higher.

Add up all projected defense-related spending for fiscal 2009 and $607 billion balloons to $750 billion — almost a third of all U.S. federal spending today. To put it another way, if the Pentagon were an independent country, it would be the 10th richest in the world.

By year's end, the cost of the Iraq war will rise to $694 billion, making the conflict the most expensive in US history, besides WWII.

To get a feel for the true costs of the Wars in Iraq and Afghanistan, check out the following. It illustrates one of the many reasons that our budget is busted and our debt ballooning:

Posted by The Independent Report at 11:57 AM No comments:

According to Goldman Sachs, the U.S. government may sell a record $3.25 Trillion of debt this fiscal year ending September 30, in an attempt to end the steepest U.S. recession in half a century.

This additional debt will be added to the current $11.25 Trillion national debt, meaning the total debt will probably exceed the entire GDP before the year is over. Last year, the GDP was $14 Trillion, but it is undergoing a serious contraction this year.

Meanwhile the budget deficit has already reached $1 Trillion — the first time it has ever reached that lofty sum — and it is expected to reach $1.84 Trillion by the end of this fiscal year (Sept. 30).

We shouldn't be surprised if the deficit reaches $2 Trillion, as these numbers have already gotten so completely out of hand. And once you're talking a about a trillion, what's a few billion more, right?

With all this talk of trillion of dollars, and the figure being tossed around rather casually, perhaps we should put $1 Trillion in perspective.

You could line the side of the road from Springfield, MA to Albany, NY with $1,000 dollar bills — stacked on their sides — and that would equal $1 trillion.

The following graphic provides a better understanding of amount of money we're talking about. Bear in mind, this is only $1 Trillion; the federal budget for ONE YEAR is $3.6 Trillion, and our debt will soon exceed $13 Trillion.

Posted by The Independent Report at 3:50 PM No comments:

The Debt and Interest Rates; a Vicious Cycle

The interest on this year’'s debt will cost taxpayers $565 billion, or 4 percent of GDP. That number will only increase in coming years. And naturally, with a shrinking GDP, it will become an ever increasing percentage of the overall economy.

While budget expenditures are increasing, government revenues so far this year have dropped 18 percent from a year ago. Government income and revenues are going in the wrong directions.

Our massive debt will put upward pressure on interest rates.

If the economy were to recover, demand for credit by the private sector would rise, meaning the government’s borrowing costs would also increase. That would raise interest rates for everyone. This makes for an odd conundrum; do we hope for a recovery at the expense of higher interest rates?

So we've begun a vicious cycle; the growing debt will eventually increase interest rates, and increasing interest rates will only further add to the national debt. Paying debt interest gets us nothing in return; it doesn't generate economic growth.

The government's falling revenues will spur the government to issue more bond debt, which will eventually have to be paid back with interest.

According to Citi Group, the federal government will sell more than $5 trillion in new debt this year and next.

The cavernous hole we're in just keeps getting continually deeper.

Posted by The Independent Report at 9:55 AM No comments:

The Office of Management and Budget estimates that the budget deficit this fiscal year (which ends Sept. 30) will be $1.84 trillion. For the 2010 fiscal year, the estimate is $1.26 trillion.

Measured against the economy, this year’'s shortfall is 13 percent of the gross domestic product. Next year’'s deficit would be 8.5 percent of GDP. These deficit projections are the highest in more than 60 years, since the end of World War II.

Economists generally agree that a country'’s annual deficits should not exceed 3 percent of economic output.

Posted by The Independent Report at 1:05 AM No comments:

The FDIC’s list of “troubled banks” stood at 305 at the end of the first quarter, the latest data available. By the end of 2008, the agency expected bank failures to cost its insurance fund around $65 billion through 2013, up from an earlier estimate of $40 billion. However, its problems have grown continually worse.

The FDIC has $53 billion to cover $4.4 trillion in deposits. Does that make you feel insured?
Posted by The Independent Report at 11:47 PM No comments: