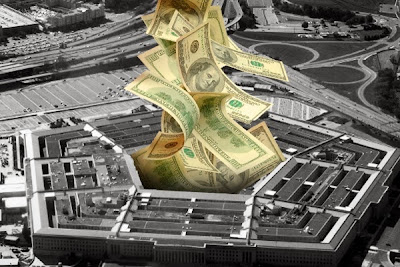 In fiscal year 2014, the federal government will spend around $3.8 trillion. Of that total, military spending will occupy $831 billion. This includes spending on military defense ($626.8 billion), veterans aid ($148.2 billion), foreign military aid ($14.3 billion), the war in Afghanistan ($92.3 billion) and the Department of Energy's nuclear weapons programs ($7.9 billion).

This massive sum takes into account the sequester, which forced the Pentagon to slice $52 billion from its budget for the 2014 fiscal year that began October 1.

Military spending, on the other hand, comes from the federal government's general fund. In other words, military spending comes at the expense of other domestic programs and needs.

Discretionary spending refers to the portion of the budget which goes through the annual appropriations process each year. In other words, Congress directly sets the level of spending on programs which are discretionary. Congress can choose to increase or decrease spending on any of those programs in a given year.

In fact, the U.S. consumed 41 percent of total global military spending that year.

It's not just that the U.S. has a bigger budget and can therefore spend more. The U.S. was also in the top 10 highest spending countries as a percentage of Gross Domestic Product (GDP).

Unnecessary Pentagon spending creates fewer jobs than every other form of federal spending, including tax cuts to promote personal consumption. In fact, it destroys American jobs if the money for it comes out of our domestic economy, according to a 2011 study by the University of Massachusetts.

This study focuses on the employment effects of military spending versus alternative domestic spending priorities, in particular investments in clean energy, health care and education.

The study compared spending $1 billion on the military versus the same amount of money spent on clean energy, health care, and education, as well as for tax cuts which produce increased levels of personal consumption.

The study also concludes that investments in clean energy, health care and education create a much larger number of jobs across all pay ranges, including mid-range jobs (paying between $32,000 and $64,000) and high-paying jobs (paying over $64,000).

Ultimately, all of this unnecessary military spending is bloating the federal budget, driving the deficit and piling onto our ever-expanding debt.

"I think the biggest threat we have to our national security is our debt," the Admiral intoned.

It would be wise to heed his admonition.

Posted by The Independent Report at 3:26 PM No comments: Links to this post

By Almost Any Measure, the U.S. Healthcare System Is Failing 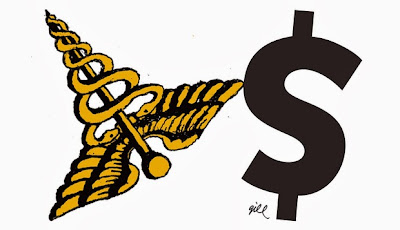 The U.S. spends more on healthcare each year than any other country in the world. Yet, according to a new report, the spending problem isn't the result of our rapidly growing segment of seniors.

Instead, most of the money is being spent on people under age 65, and it is being directed toward chronic and preventable conditions, such as diabetes and heart disease.

The U.S. spends a whopping $2.7 trillion per year on health care, or nearly 18 percent of gross domestic product (GDP). But the nation gets relatively little for the enormous amount it is spending. In fact, "The U.S. ‘system’ has performed relatively poorly,” reads the report.

The report, co-written by Dr. Hamilton Moses of the Alerion Institute in Virginia and Johns Hopkins University, had a rather surprising conclusion.

“In 2011, chronic illnesses account for 84 percent of costs overall among the entire population, not only of the elderly. Chronic illness among individuals younger than 65 years accounts for 67 percent of spending."

Despite the conventional wisdom, quite remarkably, the problem isn't old people.

The "price of professional services, drugs and devices, and administrative costs, not demand for services or aging of the population, produced 91 percent of cost increases since 2000,” reads the report.

Dr. Moses says that unlike a normal market, the healthcare market has no price discovery. Consumers operate in the darkness, entirely unaware of how much they are paying or what they are paying for. There are no market forces reigning in costs because healthcare in the U.S. doesn't exist in a true market.

“This is not a market," Moses says. "It’s far from a market. Few prices are known. They are not publicized.”

Moses also says his team’s study shows that one of the biggest problems in the U.S. healthcare system is that it is based on a fee-for-service model in which doctors and other caregivers are motivated to give lots of tests and individual treatments, as well as to prescribe drugs, instead of keeping patients well.

In other words, it's all about the treatment of illness and disease, rather than prevention. If the system was based on performance and outcomes, we'd be spending a whole lot less money.

Yet, individuals can play a bigger role in their own health and wellness than any doctor simply by making lifestyle choices that will lessen sickness, improve quality of life, and perhaps even longevity.

Keeping people from being afflicted by preventable diseases in the first place is the best way to reduce medical costs.

Some people contend that the U.S. has the world’s best health care system. But that claim simply doesn't square with the facts.

A study released in November (which was many years in the making) shows that Americans pay more per capita for health care than people in any other industrialized country. In return, we are sicker and die younger.

The Commonwealth Fund, which does research on health care and health reform, has continually shown that Americans spend far more on health care than any other nation — currently $2.7 trillion annually. That amounts to $8,508 per person, compared to $5,669 per person in Norway and $5,643 in Switzerland, the next-highest-spending countries.

In other words, no other nation's spending is even close to ours — even on a per capita basis.

Yet, all that money isn't buying us much. There's very little return on the investment.

The U.S. has the eighth-lowest life expectancy in the Organization for Economic Co-operation and Development (OECD), a group of 34 developed nations.

Commonwealth Fund researchers found that 37 percent of Americans went without recommended care, did not see a doctor when sick, or failed to fill prescriptions because of costs, compared to as few as 4 percent to 6 percent in Britain and Sweden.

Additionally, 23 percent of American adults either had serious problems paying medical bills or were unable to pay them, compared to fewer than 13 percent of adults in France and six percent or fewer in Britain, Sweden, and Norway.

But what about access? Defenders of the U.S. system say Americans have a much easier time seeing their physician than patients in other countries. Not so.

Americans wait longer to see primary care doctors. In Germany, 76 percent said they could get a same or next-day appointment, and 63 percent in the Netherlands said the same. Meanwhile, just 48 percent in the U.S. said they had that level of access. In fact, only Canada scored worse, with 41 percent saying they could see their doctor that soon.

Sadly, the U.S. health system is plagued by problems.

An Institute of Medicine report released in 2012 found that the U.S. health care system wasted $750 billion in 2009 (about 30 percent of all health spending) on unnecessary services, excessive administrative costs, fraud, and other problems.

The Institute also found that as many as 75,000 people who died in 2005 would have lived if they got the kind of care provided in the states with the best medical systems.

Quite plainly, all of the arguments that the U.S. healthcare system is the greatest in the world are plainly false or, at the least, misleading. By almost any measure, the U.S. lags the developed world, and even many developing nations.

Not only do Americans pay significantly more per capita for their healthcare than the citizens of any other nation on earth, they are also fatter, sicker, have less access, and die younger than those in other industrialized countries.

It's still unclear whether the Affordable Care Act (aka, Obamacare) will positively affect any of this, but it had better. The current state of affairs isn't just unacceptable; it's untenable.

Posted by The Independent Report at 3:42 PM 2 comments: Links to this post