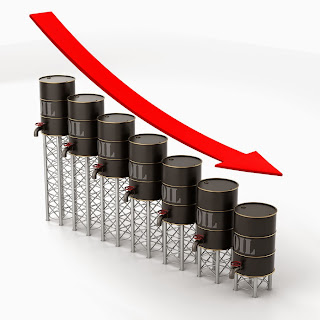 Even if you don't watch the news and haven't heard about falling oil prices, chances are you've seen the results as the gas pump.

After months of tumbling prices, the cost of a barrel of US oil has fallen to roughly $75.

US crude prices have dropped 30% from their June peak of $108, putting oil in bear market territory. In fact, oil prices have fallen to a three-year low.

Brent oil, the international benchmark, has also fallen below $80, reaching a four-year low.

This tumble is good for consumers. Every one-cent drop in the price of gasoline amounts to a $1 billion boost to US household incomes, according to the automobile group AAA.

So, what's behind this plunge in oil prices? Well, it's a combination of things.

Secondly, oil is priced in dollars, and the dollar is strengthening against other currencies. This is increasing the purchasing power of the dollar, meaning we can buy more oil with each dollar. In other words, as the dollar strengthens, oil becomes relatively cheaper.

This is great for the US, but not for other nations, which must first convert their currencies to dollars before buying oil. It now requires more of each of those currencies to obtain the dollars needed to buy oil.

Lastly, even as demand has fallen, the supply of oil has continued to grow. US oil production, for example, is at its highest level since 1970. Meanwhile, domestic demand is down because Americans are driving less and using more fuel-efficient cars.

This combination of slumping demand, a stronger dollar, and ample supplies have led to a big drop in oil prices.

Fracking for shale oil in the US has altered global oil markets — at least for the time being. The process has allowed the US to overtake Saudi Arabia as the world's biggest oil producer. The US hasn't seen this level of production in more than four decades.

However, the US is still the world’s largest oil consumer, and imported an average of 7.5 million barrels of crude per day in April, according to the Energy Information Agency. This undermines any reasonable notion of the US becoming an oil exporter.

Yet, even as the price of oil is tumbling, the cost of finding it is not. Fracking, in particular, is a very expensive process.

Shale oil is expensive to extract by historical standards, and is only viable at high-enough prices. Shale oil costs $50 to $100 a barrel to produce, compared with $10 to $25 a barrel for conventional supplies from the Middle East and North Africa.

At the current price of $75 per barrel, many producers will not be able to survive. The cost to extract shale, as well as Canadian tar sands, may be exceeding the returns from those extractions (more on tar sands in a moment).

Many shale oil producers do not have free cash flows, and are in fact in the negative. In other words, their capital expenditures result in negative operating earnings. In essence, their cost of operations exceeds their earnings, thwarting profitability.

These companies have taken advantage of low interest rates and assumed enormous sums of debt to finance their huge operating expenses. This huge drop in oil prices will leave them quite vulnerable, and many will likely collapse and go out of business. Many of them will find it difficult, or impossible, to return to the debt markets in this environment, as the capital markets decide not to throw good money after bad.

In the 1930s, it cost about $400,000 in today's dollars to drill an oil well in Texas, from which crude gushed plentifully. Such a well produced thousands of barrels a day for decades.

However, it now costs $6 million to $12 million to drill a well in the Bakken shale oil field in North Dakota. This requires complex fracking techniques and produces roughly 100 barrels (sometimes more, sometimes less) per day for just a couple of years. Then the well runs dry. This is why so many wells need to be continually drilled.

It's not just shale oil that's being affected by tumbling oil prices. The extraction and production costs of Canadian tar sands, or oil sands, are perhaps becoming too expensive to sustain at today's prices.

The Canadian Energy Research Institute estimates that oil-sands projects need a price of $85 a barrel to be profitable in the current cheapest method, and new standalone mines will require $105 a barrel to make a reasonable return.

Those prices don't seem likely for quite some time.

A recent report from OPEC cut the group’s forecast for global demand and prices over the next five years, which helped to drive down prices even further.

Goldman Sachs’ analysts have slashed their target price for US crude oil for the better part of 2015 from $90 to $75.

Sensing an opportunity to crush its competition, OPEC has stood pat and not altered supplies. The cartel seems satisfied with current low oil prices (at least for now) since they will likely kill the competition coming from North American shale oil and tar sands producers.

Acting unilaterally, Saudi Arabia cut oil prices for the US this month, while increasing prices to other large buyers, such as China. The move helped to push US oil prices to three year lows.

The Saudis seem to be aggressively moving against US frackers in an attempt to drive them out of business. With oil prices under $80, extracting shale oil may no longer be viable for many producers.

Typically, when demand for any product slumps, producers cut supply to stabilize prices. That isn't happening in the oil markets, despite projections that the demand for crude will remain weak for the next few years.

In its annual world outlook released this month, OPEC predicted less demand for its oil through 2017.

Demand for OPEC crude will pick up again in 2018, but a year later it will still be lower than demand was in 2013, OPEC said.

OPEC crude presently meets around a third of global oil consumption needs. Perhaps that share will shrink if production increases in other nations, but, given the projections for global demand, that is no certainty.

If Saudi Arabia and OPEC are successful in crushing North American shale and tar sands producers, they will secure more market share and could then tighten supplies, thereby raising prices.

Higher prices are also needed for traditional US crude oil producers to maintain their investments in exploration, and for their highly expensive offshore drilling projects.

While lower oil prices are a boon to consumers, acting as a sort of tax cut, they also reflect a weakened global economy, which is not positive.

Given the growing world population and expanding global middle class, demand for oil will continue to rise, albeit more slowly than in the past. Oil prices will remain volatile, but even at $75 per barrel, they are still quite high by historical standards.

Oil was $9.95 a barrel in April 1986, and the annual average stayed below $30 a barrel until 2000. Rising global demand has since driven up prices considerably. Despite the recent price drop, oil is still 250% higher today than it was at the start of the millennium.

So, while $75 oil may seem like a bargain, a little historical perspective indicates otherwise. Nonetheless, American drivers are surely quite thankful for the current price drop every time they pull into a gas station.

Moreover, lower oil prices should ultimately reduce the cost of every transported product in America, and that's a whole lot of stuff.

Posted by The Independent Report at 2:58 PM No comments: