Some Perspective on the Rise in Median Household Income

The Census Bureau reported this week that median household income rose to $59,039 in 2016, a 3.2 percent increase from the previous year and the second consecutive year of healthy gains.

To be clear, household income is the amount of income earned by an entire household, whether it’s a single occupant, a couple, or roommates.

Let's explore the term 'median', which denotes the midpoint. The median is the "middle" value in a list of numbers.

The fact that median household income rose last year is obviously good news, but before we pop the champagne, let’s have a little perspective.

Middle-class households are only now seeing their income eclipse 1999 levels. The Census Bureau reports that in 1999, median household income, adjusted for inflation, was $58,655.

Yes, it took us 17 years just to get back to where we started. Are we really supposed to celebrate that?

Again, 50 percent of all wage earners make less than $30,000 per year, and a lot of them come from single-income households.

The proportion of Americans who live alone rose to 27 percent in 2013, according to the latest Current Population Survey from the Census Bureau; that’s more than one-in-four people. Obviously, these are single-income households and a lot of them are surely earning less than the median.

The average American household consisted of 2.53 people in 2016.

So, the median household income is generally a byproduct of two earners. That suddenly makes $59,000 seem a lot less impressive.

Consider how different the earnings are among those above and below the median income.

According to the Internal Revenue Service (IRS), the top 1 percent had an adjusted gross income of $465,626 or higher for the 2014 tax year.

Clearly, the top 1 percent are not all billionaires.

Roughly 534,000 Americans made more than a million dollars in 2013, according to the latest IRS data available.

The mega wealthy — a fraction the top 1 percent — now earn an average of $1.3 million a year. That’s more than three times as much as the 1980s, when the super rich "only" made $428,000, on average, according to economists Thomas Piketty, Emmanuel Saez and Gabriel Zucman.

The top fifth of earners are taking home more than half of all overall income, a record.

The top 1 percent take home more than 20 percent of all income.

However, the bottom 50 percent collect about 12 percent percent of national income.

This is why the savings rate was just 3.5 percent in July. People simply don’t have enough left-over income to save. Most Americans are spending everything they make just to get by and are using credit cards to make up the difference, even for basics like groceries and gas.

Credit-card debt in the U.S. recently surpassed the peak set just before the 2008 financial crisis. Outstanding revolving credit, which includes credit-card debt, rose to $1.02 trillion in June, according to a monthly report from the Federal Reserve.

Low incomes and slow income growth are having some rather glaring effects, especially on younger Americans.

Last year, the Pew Research Center reported that 32.1 percent of 18- to 34-year-olds lived at their parents’ homes in 2014, exceeding the 31.6 percent of young adults who were married or living with a partner in their own household.

Yes, one third of young adults — people up to the age of 34 — are still living with their parents. Yet, the findings were even worse the following year.

Almost 40% of young Americans were living with their parents, siblings or other relatives in 2015, the largest percentage since 1940, according to an analysis of census data by real estate tracker Trulia.

It should be noted that 1940 was the end of the Great Depression, so the current state of affairs is quite troubling.

Yes, it’s nice that median household income went up last year, but we’re still only back to 1999 levels and it’s clear that the masses are still struggling.

That’s important to consider, if you’re celebrating the rise in median household income.
Posted by The Independent Report at 8:18 AM No comments:

Labor Day: a Reminder of How Far We've Come and How Far We Still Have to Go 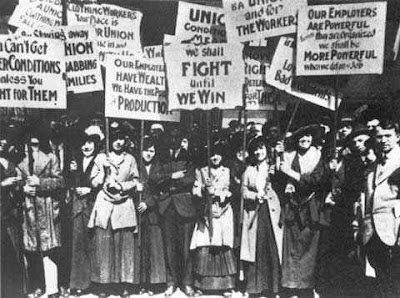 Labor Day, the first Monday in September, is a celebration of the American worker. As you might expect, this day of tribute was created by the labor movement. Since labor has always had less capital than management, its strength is always in its numbers.

The day is an acknowledgement of the American workers who built this nation, and continue to do so, while advancing it economically and socially.

Though municipal ordinances were passed in 1885 and 1886, the first state to officially recognize Labor Day by law was Oregon, on February 21, 1887. Colorado, Massachusetts, New Jersey, and New York all followed suit later that year, and by 1894 a total of 28 states had adopted the holiday in honor of workers.

Finally, on June 28 of that year, Congress passed an act making the first Monday in September of each year a legal holiday in the U.S.

Labor unions, such as the American Federation of Labor, the Brotherhood of Carpenters, the American Railway Union and the International Association of Machinists were instrumental in fighting for betters working standards, as well as promoting a holiday to celebrate the working man (and later, working women).

Fighting for better labor standards, such as the eight-hour work day, the five-day work week and the minimum wage, etcetera, have raised the living standards of all workers and led to higher economic and political principles for all.

While Labor Day also symbolizes the unofficial end of summer and is celebrated with beach parties, backyard barbecues and retail-sales events, no American worker should ever lose sight of the true meaning of Labor Day, or the sacrifices that the labor movement made over the past century to improve work and living standards.

In the late 1800s, the average American worked 12-hour days and seven-day weeks to simply get by. Children as young as five or six worked in mills, factories and mines across the country, earning a fraction of their adult counterparts’ wages. Conditions for all workers were poor and often terribly unsafe. Many employees lacked access to clean air, toilet/wash facilities and work breaks.

These circumstances drove workers to organize and strike for better conditions, hours and pay. At times, these strikes turned violent and dozens of workers died in protest. Chicago was the scene of the infamous Haymarket Riot of 1886 and the bloody Pullman strike in 1894, the latter of which resulted in federal troops being deployed to crush the rioting workers.

The incidents also led to common labor statutes that are now accepted as standard, such as child labor laws, mandatory breaks, paid overtime, vacation time and even paid holidays.

The unfair, unsafe, often inhumane labor practices of the 19th Century ultimately resulted in United States labor law, whose basic aim is to remedy the "inequality of bargaining power" between employees and employers.

The Fair Labor Standards Act of 1938 requires a federal minimum wage and discourages unhealthy working weeks over 40 hours through time-and-a-half overtime pay. The Occupational Safety and Health Act of 1970 requires that employees have a safe system of work.

The Clayton Act of 1914 guarantees all people the right to organize and the National Labor Relations Act of 1935 gave the right for most employees to organize over unfair labor practices without punishment.

None of these things would have resulted if not for the struggles and organization of American workers. We owe better pay, better hours, paid overtime and safe workplaces to the workers who fought for these things.

There is still a long way to go in order for most workers to be fairly compensated for their labors.

Contrary to popular belief, minimum wage workers are not all, or even mostly, teens. Less than half (45 percent) of the 2.6 million hourly workers who were at or below the federal minimum in 2015 were ages 16 to 24.

This isn’t theoretical; it's real life for millions of Americans. According to U.S. Census Bureau, there were 23 million single-parent families in 2016 and the vast majority were headed by single mothers. Today, 1 in 4 children under the age of 18 are being raised without a father and almost half (40 percent) live below the poverty line.

It’s not just minimum wage workers who are a struggling. A reasoned argument can be made that most American workers are underpaid, which is a major factor in our troubling income inequality problem.

Sadly, America ranks among the worst in the world in this category. Of the 35 developed countries in the Organization for Economic Development (OECD), only three have worse income inequality than the US (Turkey, Mexico and Costa Rica).

According to the Social Security Administration, in 2015:

Unionized workers are rarely minimum wage workers. Many are skilled laborers who rightfully earn more. The problem is that there are relatively few union workers left in America today.

The share of American workers who actually belong to a labor union has been falling for decades and is at its lowest level since the Great Depression, according to the Pew Research Center.

At their peak in 1954, 34.8 percent of all U.S. wage and salary workers belonged to unions, according to the Congressional Research Service.

In many ways, American workers have come a long way over the past century, but they clearly have much further to go.

However, the labor movement's past achievements are worth remembering and celebrating on this, and every, Labor Day.
Posted by The Independent Report at 8:12 AM 3 comments: