The Debt Monster is Slowly, Steadily Devouring Us 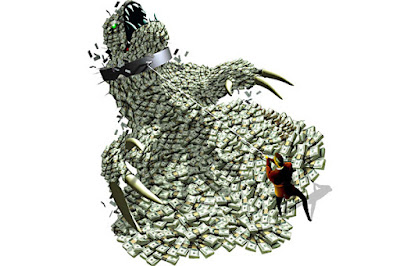 “To contract new debt is not the way to pay old ones.” - George Washington

“To preserve our independence, we must not let our rulers load us with perpetual debt. We must make our election between economy and liberty, or profusion and servitude.” - Thomas Jefferson

“Debt is the fatal disease of republics; the first thing and the mightiest to undermine governments and corrupt the people.” - Wendell Phillips

Our next financial and/or economic crisis (one will lead to the other) will most surely be sparked by our unhealthy and unsustainable debt levels. The size of our various debts is practically incomprehensible. Numbers in the trillions just don’t square in the minds of most people.

For starters, one trillion is one-thousand billion. The physical size of $1 trillion is absolutely stunning. This infographic really helps put things in perspective (click on image to enlarge): 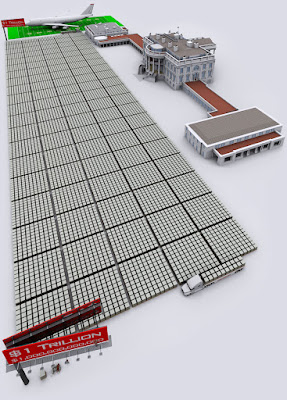 The total public debt reached $19.98 trillion by the end of 2016, which equalled 106 percent of gross domestic product. In essence, the nation’s debt is bigger than our entire economy.

To get some perspective on what $20 trillion looks like, check out this infographic:

Governments pay their debts with their income, in the form of tax revenues. That means we, the people, are on the hook for all government debts. The government will increase our taxes, if necessary, to pay those debts. Or, the government will inflate (and thereby devalue) the currency to make its debts more manageable.

However, taxpayers are also consumers, who have their own debts… and they are sizable.

Total consumer debt increased by $460 billion last year — the largest increase in almost a decade — bringing the total to $12.58 trillion. The record high of $12.68 trillion was reached in 2008, which nearly tanked the economy. Yet, after a period of deleveraging, consumer debt is once again on the rise, as if nothing was learned.

Yes, we are dangerously close to the whopping debt total that crippled the economy nine years ago, the after shocks of which are still resonating. Yet, the New York Fed expects household debt to reach its previous 2008 peak sometime this year.

When you combine the national debt (aka, total public debt) with consumer debt and all other forms of debt, things become really freaky.

Total credit market debt, which includes all forms of debt — financial sector debt, government debt (federal, state, local), household debt and corporate debt — has reached a staggering $66.1 trillion, according to the Federal Reserve’s latest Flow of Funds report. The total was $63.5 trillion at the end of 2015.

For example, many economists and professors have long viewed a budget deficit of 3 percent as manageable and sustainable. Budget deficits are reflected as a percentage of gross domestic product. However, 3 percent of our $19 trillion GDP amounts to a $475 billion deficit. In other words, utilizing this historic standard, the government is now adding nearly $1 trillion to the debt every two years.

It's a situation that’s quite worrisome and problematic.

Another reason these numbers have grown to be so outlandish is that debt (aka, credit) is the foundation of our economic system. Without debt, there can be no growth because all money is issued as debt.

It’s a bizarre system in which some very bad outcomes are baked into the cake. Economic growth depends on credit/debt expansion, yet that expansion is outstripping growth by a 4-1 ratio. Maintaining the current system is mathematically impossible, yet we are plowing forward, headlong into the abyss.

As if the $20 trillion national debt and the $12.58 trillion consumer debt aren’t scary enough, there’s an even bigger, freakier number out there.

The federal government’s total of unfunded obligations — the gap between revenue and spending commitments — has reached a record $84 trillion.

Yes, you read that correctly — the U.S. government has $84 trillion in future obligations and it doesn’t have the funds to pay them. These unfunded commitments include programs like Medicare and Social Security.

The federal debt only includes what the government owes to Treasury holders. It doesn't take into account what's owed to seniors, veterans and retired government employees.

Even if we were only talking about the $20 trillion national debt and blindly dismissing these massive, unfunded liabilities, there is a big problem with manner in which it is discussed.

Many economists and analysts refer to our debt-to-GDP ratio, which is misleading since no country pays its debt with its entire economy. Debts can only be paid with revenues, or taxes. A country with high taxes can afford more debt than a low tax country. Debt to GDP does not account for that.

Forbes examined the debt-to-government tax revenue for the thirty-four OECD countries (the world’s developed economies), “Since that is the government’s income.” The U.S. is in third place (after Japan and Greece), with a debt to income measure of 408 percent.

As Forbes noted, “Only three developed countries in the world are in the red zone for national debt to income. The U.S. is one of those three.”

Despite these problems and these numbers being quite public, our elected leadership in Washington does nothing to address them.

In essence, the government collects $3 trillion annually in taxes, yet somehow that still isn’t enough.

As previously noted, economists have long argued that the U.S. could run annual deficits of 3 percent because our economy historically grew by about 3.28 percent annually. The annual economic growth made the additional deficit spending a wash.

However, there are two problems with this line of reasoning:

2. Even if the government reduced its deficit spending to match the lower economic growth, or even if it eliminated the deficit entirely, it would do nothing to address the underlying $20 trillion national debt. It would only stop adding to it. That would be a start, but it wouldn’t be a solution to this massive predicament.

Many Americans are entirely unaware of the scope of these problems and even those who are feel powerless to do anything about them. But these debts will eventiually, undoubtedly, blow up in our faces. Many of the things we take for granted will go away in the next crisis. Millions of jobs and homes will be lost. I believe the next crisis will make 2008 look like a dress rehearsal.

The best thing you can do is get out, and stay out, of debt. If the government won’t live within its means, at least we can.

And when the next crisis strikes, don’t expect the government to bail us out. Instead, expect them to demand that we bail them out.
Posted by The Independent Report at 1:56 PM No comments: 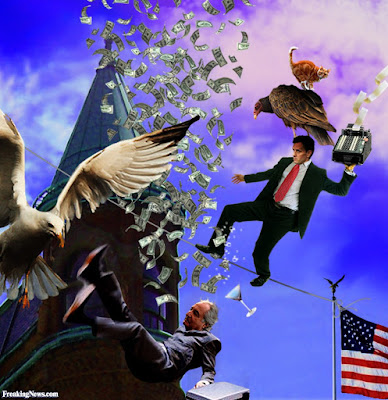 During the 2008 financial crisis, the Federal Reserve took the dramatic step of initiating quantitative easing, or QE, after determining that dropping its key interest rate to zero wasn’t sufficient.

Following three successive rounds of these Treasury and mortgage bond purchases, the Federal Reserve’s balance sheet ballooned to $4.5 trillion. That amounted to a fourfold increase from late 2008 to late 2014.

However, minutes from the Fed’s March meeting reveal that the central bank now plans to start selling off some of those assets this year, which is expected to drive up long-term interest rates.

The Fed has never done anything remotely like this before; it is in uncharted waters. There is no map for unwinding $4.5 trillion. No central bank has ever attempted anything so audacious and grand.

Though the Fed says the reductions will be “gradual and predictable,” and will be accomplished by “phasing out” reinvestments (meaning it won’t abruptly stop reinvesting these assets when they mature), its actions will undoubtedly send shock waves through markets.

While the Fed hasn’t actively increased its portfolio since ending QE3 in 2014, it has continued to roll over maturing Treasuries and reinvest principal payments from the mortgage-backed securities. If the Fed simply ceases to reinvest the payments it earns on these securities as they mature, that would automatically shrink its balance sheet.

The federal funds rate — an overnight lending rate between banks — affects short term rates. Adjusting it higher or lower is the lever the Fed exercises to affect other short-term interest rates.

Though short-term rates are the most sensitive (or reactive) to changes in the funds rate, longer term interest rates can ultimately be affected as well, most especially in this instance.

Federal Open Market Committee members say they expect to make two more hikes in 2017 and three in 2018. But the Fed may not have to engage in any further increases to the funds rate if the unwinding of its balance sheet begins to tighten, as expected.

Releasing its long-term securities to the public would push down their prices and drive up their yields (bond prices and yields move in opposite directions).

To be clear, though the Fed doesn’t usually control long-term rates, the shrinking of its balance sheet will surely increase the yields of government bonds with longer maturities. When there is copious supply, prices fall and yields rise.

The Fed will attempt to manage this process as smoothly, cautiously and predictably as it possibly can. But shrinking its balance sheet could prove to be uneven and cumbersome.

When the Fed finally ended QE in October 2014, it did so in a measured and predictable manner, gradually lowering its bond purchases by $10 billion per month. When the central bank began to “taper” in December 2013, it was buying a whopping $85 billion of securities per month. By October 2014, those purchases had ended.

Similarly, the Fed will need to publicly commit to reducing its balance sheet by a certain dollar amount each month.

However, in order to do so, the economy must continue to at least hold steady, if not improve. An economic downturn would send the process into disarray and, ultimately, reversal.

In the meantime, when the biggest buyer of Treasuries and mortgage securities exits the market, mortgage rates are sure to rise. So will the borrowing costs of the federal government.

Additionally, when the Fed stops rolling over its securities, the Treasury will have to raise cash to pay back the Fed for those maturing securities.

That will cost the American taxpayers hundreds of billions of dollars.
Posted by The Independent Report at 8:15 AM No comments: