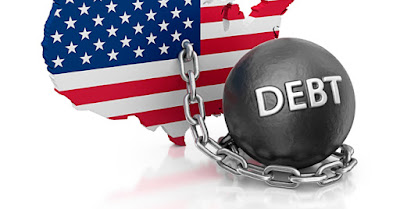 Rising government debts are becoming worrisome all over the world. Over the past eight years, governments have added $60 trillion in new debt to the already enormous piles of existing debt.

As a point of reference, the entire output of the global economy in 2014 was estimated at $77.6 trillion by the International Monetary Fund (IMF).

The US has been an active player in this global debt binge.

According to the US Treasury, the national debt now stands at $18.775 trillion.

Without context, numbers can be meaningless, and even misleading. So, let me attempt to provide some context.

The IMF recommends that a developed nation’s debt not exceed 60 percent of its gross domestic product (GDP), or the entire output of its economy. A nation’s debt is the cumulative byproduct of accruing annual budget deficits.

In essence, a deficit results from a government spending more money in any given year than it collects in taxes and other revenues. The deficit adds to a nation’s debt.

The concern is that high debt-to-GDP ratios cause economic instability and hinder economic growth.

In other words, our debt is more than 100 percent of our economic output. That’s a whole lot bigger than the IMF’s 60 percent recommendation.

Yet, it's important to remember that the government doesn't pay its expenditures with the entire US economy; it pays for them with its revenues, which are procured through corporate and personal taxes.

The 2016 federal budget shows $3.525 trillion in revenues, which is about 20 percent of the national debt. That's a more accurate and useful reflection of the government's true debt ratio than is debt-to-GDP. It's also more worrisome.

In essence, if the government dedicated every dollar it collected this year to the national debt, it could only pay down roughly 20 percent, and there would be no money for anything else.

The trouble is that each annual deficit leads to even more debt.

For example, the federal government will run a $474 billion deficit in fiscal 2016, which amounts to 2.5 percent of GDP (by the way, the fiscal year is supposed to begin on October 1, but, due to Congressional dysfunction, the budget wasn’t handed to the president to be signed into law until November 2).

Economists have long recommended that a nation’s deficit should not exceed its annual economic growth. For example, if a country’s economy grows by 3 percent, it can sustain a deficit of 3 percent.

While the US economy used to grow by 3 percent annually, it hasn’t cracked that number since 2005. We’re now stuck with roughly 2 percent annual economic growth, which means our deficits should be smaller as well.

However, it should be noted that if the US were to follow the above deficit formula it would be perpetually indebted. A country needs to have economic growth exceeding its deficit in order to begin paying down its existing debt, rather than adding to it each year.

The current federal deficit of 2.5 percent is certainly better than it had been in recent years.

After the 2008 financial and economic crash, deficits soared as the federal government sought to fill the void left by crippled US companies and households, as can be seem below.

Deficits by Year, as a Percentage of GDP (source: Federal Reserve)

Clearly, the deficits have been moving in the right direction. But this doesn’t diminish the fact that deficits are the norm in the US, and they have been for many decades. There is never an honest attempt by Congress to balance the budget by either spending less or collecting more to avoid continual deficits.

Kiplinger’s and the Conference Board both project US economic growth of 2.5 percent this year. If that proves to be accurate, the 2.5 percent deficit would be a wash.

But here’s the concern:

As the national debt has grown continually larger, deficits that once seemed reasonable (say, 3 percent) result in rather huge dollar amounts. For example, this year's 2.5 percent deficit amounts to a whopping $474 billion.

In fiscal 2015, the US spent more on debt service (interest payments) than on housing & community, transportation, education, and food & agriculture. Debt service buys you nothing.

Deficits of that size were once unimaginable; they are now a matter of fact, and they will continue to be at least that large from this point forward. It's just math.

There’s no reason that the deficit will necessarily be restricted to 2.5 percent annually, but even if it is, the result would be $1 trillion in added debt every two years. Yet, as the debt continues to rise, deficits of 'just' 2.5 percent will result in ever larger dollar amounts.

It’s easy to see how this whole thing spirals out of control and eventually cripples the United States.

It’s not some far out notion. The numbers are rather clear.

Our debt is on track to become so cumbersome that it will prevent the government from tending to needs that most Americans take for granted.

The national debt isn’t going away. It will continue growing dangerously larger each and every year, well into the foreseeable future.
Posted by The Independent Report at 3:15 PM 2 comments: