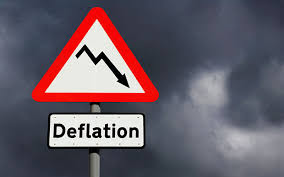 Right now, there is a growing concern about deflation around the world.

The price of oil has crashed (along with most other commodities), which has pushed down transportation costs. That, in turn, has driven down the cost of virtually all goods.

The Federal Reserve has a publicly stated goal of maintaining an annual inflation rate of 2 percent.

However, the latest inflation rate for the United States is just 0.2 percent through the 12 months ended in August.

For perspective, the inflation rate in the United States averaged 3.32 percent from 1914 until 2015.

Most worrisome, perhaps, over past year wholesale prices have fallen 0.8 percent.

Recessions are by definition deflationary, and many of the world’s major economies are now in recession -- including Japan, Russia, Canada and Brazil, for example.

Even China, the world's second biggest economy (after the U.S.), is slowing.

The Asian giant is the top user of almost all commodities, including coal, iron ore and most metals. But as its economy slows, its demand for commodities is slowing too.

China overtook the United States as the world's top importer of crude oil for the first time in April.

Though it is not in recession, China's falling demand has put downward pressure on all commodities, which is having a global impact -- especially on commodities exporters, such as Australia, Russia, Brazil, Indonesia, and the big oil producers of the Middle East.

This is adding to disinflationary pressures around the globe.

Despite their best efforts, central bankers around the world have seen inflation rates fall far short of their targets in recent years, to the point that deflation is now a genuine concern.

Central banks fear deflation above all else. When it takes hold it can be very difficult to halt, and it can be crippling.

Deflation is worrisome because falling prices make it difficult for the government and companies to repay debts. Whatever you borrow money for is soon worth less than you paid.

Delation is marked by continually declining asset prices, and is often associated with a reduction in the money supply, or credit. It leads to falling wages and layoffs, and can be the prelude to a very bad recession.

While deflation is characterized by falling prices, it is ultimately a continual increase in the purchasing power of money.

While that may seem wonderful, it is a particularly troubling outcome because it de-incentivizes investment. All investments simply lose value over time, even on an annual basis. The purchase of houses, cars, commercial buildings, factories and the like quickly become bad investments.

But without these investments, the economy will spiral downward in horrifying fashion. The last time the US experienced deflation was during the Great Depression.

The specter of Japan's struggle with deflation is what worries many. The Asian nation has battled slowly falling prices for the last two decades. Despite nominal interest rates of zero, Japan is still fighting deflation.

However, with near-zero interest rates in the US for the past seven years, there is little room left to maneuver without going into negative territory.

For perspective, the Fed's benchmark rate has averaged 6 percent since 1971, and soared as high as 20 percent in 1980.

Low interest rates generally stimulate demand, which will lift the economy. Yet, historically low rates have not stimulated demand in recent years.

Consumers remain cautious, and are wary of spending and/or borrowing at pre-recession levels.

Even though the Fed has made money very cheap and readily available, it cannot force Americans to borrow. People with huge debts, low and/or falling wages, no jobs, or the fear of becoming unemployed, will not be persuaded to borrow.

And therein lies the problem: Our entire economy is predicated on borrowing and lending for economic growth to occur.

Money is created through borrowing. Without borrowing, there is less money and no growth. Absent growth, there are no jobs. And without jobs, there is a shrunken tax base and, ultimately, recession.

The Fed is now confronting the fact that three rounds of quantitative easing (QE) and seven years of its zero-interest-rate policy (ZIRP) have failed. The Vice President of the St. Louis Federal Reserve recently admitted as much.

When you’ve given it your best shot and it still isn’t enough, then what?

Deflation is a bitch. Just ask the Japanese.
Posted by The Independent Report at 4:36 PM