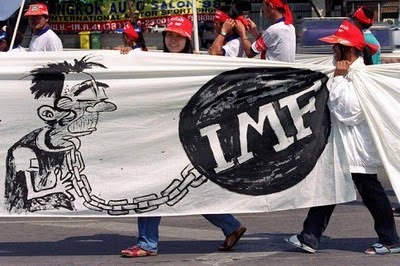 First it was Dubai. Then it was Greece. Then Ireland. Then Portugal. And there are also legitimate concerns about Belgium, Austria, Spain and Italy.

But those nation's debt problems are small potatoes compared to the burden that Japan is facing.

Over the two decades between 1989 and 2009, Japan's government debt exploded from 66% of gross domestic product to a whopping 226% — a staggering debt load that is by far the largest percentage of any industrialized nation.

Japan has been trapped in a deflationary spiral for the last two decades, and there are no signs of it ending any time soon. Despite massive government stimulus, the nation cannot seem to grow its economy, and therefore it's debt-to-GDP ratio just keeps expanding.

In 1968, Japan overtook Germany to become the world's second largest economy, behind the US. And it held onto that position for 42 years before finally being eclipsed by China last year. It was a historic sea change.

The combination of a shrinking economy and an ever-expanding debt were significant reasons that Standard & Poor's lowered Japan's credit rating last week, as it did in 2002. The downgrade pushed Japan's long-term rating from AA to AA-minus.

But the move was a long time coming. The writing was on the wall for many years.

Japan had been repeatedly warned to get its fiscal house in order. As it had previously, S&P noted that Japan has no "coherent strategy" to tackle problems that have been decades in the making.

"The downgrade reflects our appraisal that Japan's government debt ratios--already among the highest for rated sovereigns--will continue to rise further than we envisaged before the global economic recession hit the country and will peak only in the mid-2020s."

It seems that events have gotten away from the Japanese government and may have finally spiraled out of control.

Japan's public debt is racing toward 1 quadrillion yen, or $12 trillion. The good news is that the vast majority of that debt (95%) is owed domestically to banks, insurance companies and pension funds — not to foreigners. Japanese citizens hold an extraordinarily high household savings of $15 trillion, which has also allowed the government to borrow at home.

As Japan's economy stagnated in the late 1980s, the government stepped in and increased spending to offset private sector declines. But the economy continued to sputter even as government debt increased precipitously.

What once seemed impossible now seems inevitable; Japan appears headed for a full-fledged debt crisis and possibly a currency devaluation. When such a moment arrives, the impact will be felt globally and could push the world's economic system to the brink, triggering a global depression.

With one of the oldest populations in the world, Japan's problems are only mounting and remain poised to worsen.

Last year, Japan's population fell by a record number, as deaths exceeded births. The country's life expectancy is among the highest in the world, while its birth rate is among the lowest, a miserable combination.

People 65 and older make up about a quarter (23%) of Japan's population and the Baby Boomers are nearing retirement. By 2050, the government projects that fully 40% of the population will be over 65.

As it is, the percentage of retirees in Japan is three times that of the rest of the world, which is putting enormous stress on the retirement system. And it will only get worse.

Due to the combination of a low birth rate and long life expectancy, Japan's population has declined in each of the last four years. That will only exacerbate an already existing problem; there are too few workers to replace retirees and it is resulting in a shrinking tax base.

The poor economy and dour national mood have led to a very low birthrate; there were just over 1 million births last year in a population of just under 126 million.

In addition to shrinking the tax base, Japan's aging population is expected to shrink consumption annually from now on. At the same time, the majority of the national budget is already funded by deficit spending. What this means is that the already shrinking tax base and economy will get progressively smaller still.

As the tide of Japanese retirees continues to rise, more of them will be pulling money out of savings accounts and government pension funds. And as Japanese citizens start selling off government bonds to support their retirement, the government will be forced to rely on external, or foreign, lenders in the bond market.

However, with a debt load so perilously high, and structural problems so deep, the market will demand higher yields that could become crippling to the Japanese government.

Japan has never had to rely on the global bond markets. If it had to pay the same interest rates as the other G-7 nations, its interest costs would exceed revenues. Yet Japan's dire fiscal situation indicates that it should already be paying considerably higher rates than the other G-7 nations.

At present, there is a total disconnect in the bond market that doesn't reflect Japan's dire fiscal and economic situations.

Japan's current debt payments are about $244 billion a year. Kyle Bass, who runs the Dallas-based hedge fund Hayman Advisors, has calculated that every percentage point in higher yields adds another $125 billion in annual interest expenses.

So if investors demand just an extra two percentage points above current yields — bringing Japan in line with Germany and the US — it would add $250 billion in annual interest payments to the country's debt figure. That would consume Japan's entire $489 billion in revenue.

Japan is the proverbial canary in the coal mine, and it serves as a warning to other industrialized nations also carrying unsustainable debts — including the US.

Once the bond market loses confidence in Japan, it's game over. The effects of that moment will be felt worldwide, and it will be seismic.

Posted by The Independent Report at 3:00 PM