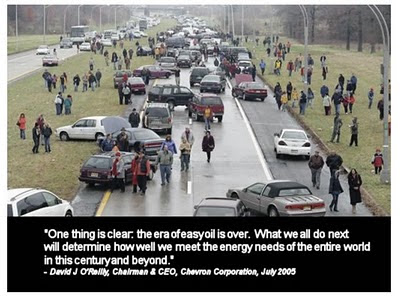 "When oil production goes into decline, it’s going to be a defining issue for humanity." — Robert Hirsch

The report, published in February 2005, is more commonly known as the "Hirsch Report." This extraordinary document examines the time frame and implications of Peak Oil, and looks at what preparations need to be undertaken at a national level to mitigate its impacts.

Written by Hirsch and two colleagues, the report's introduction reads as follows:

The peaking of world oil production presents the U.S. and the world with an unprecedented risk management problem. As peaking is approached, liquid fuel prices and price volatility will increase dramatically, and, without timely mitigation, the economic, social, and political costs will be unprecedented. Viable mitigation options exist on both the supply and demand sides, but to have substantial impact, they must be initiated more than a decade in advance of peaking.

And from there the report goes on to outline the numerous, and rather grave, troubles that lie ahead as a result of peaking oil production. It's the kind of stuff that can keep you awake at night, questioning the future. What's most troubling is that virtually nothing has been done since the report's release to prepare for this looming watershed.

It's been six years since the Hirsch Report warned of a global problem of "unprecedented" proportions with economic, social, and political impacts that are likely to be extremely severe. The authors forecast "protracted economic hardship" for the United States and the rest of the world. They warned that Peak Oil is a problem that deserves "immediate, serious attention."

Yet, the media haven't given this topic the coverage it clearly warrants. As a result, the public is largely unaware of this pending crisis. Apparently, fear of initiating a panic takes precedence over careful planning and public policy.

The subject of Peak Oil is a tough one, because its implications are so dire. But it is by no means a cryptic or fringe concept. If you've seen the documentary "A Crude Awakening," you know that this topic is a widely accepted reality in oil industries and government ministries across the globe. The film is chock full of interviews with petroleum geologists, former OPEC officials, energy analysts, politicians, and political analysts — all of whom recognize the gravity of the situation.

Last year, the Dept. of Energy publicly stated that Peak Oil is all but upon us. And a report from the U.S. military paints an alarming picture of future oil supplies; it predicts that global production will peak within two years, and there could be shortages by 2015.

The sad truth is that new oil-field discoveries peaked in the late 1960s, and that's why petroleum companies are going to such extremes as to drill in 2-3 miles of ocean water to retrieve oil. The more difficult it becomes to access oil, the more expensive it becomes.

Everything in our modern society is oil-dependent — from food production and distribution, to textiles and manufacturing, to the transportation of all goods and people.

The Hirsch Report notes that over the past century the US economy has been shaped by the availability of low-cost oil and that Peak Oil will present the US with economic losses that will be measured in the trillions of dollars.

According to the report, peaking oil production will be abrupt, providing little time to evolve. Consequently, the repercussions will be revolutionary. And without massive mitigation, the report warns, the problem will be pervasive and long-term.

Yet, even though this essential document was issued six years ago, little to nothing in regard to mitigation has been done on a governmental or national level.

Mr. Hirsch outlined the challenges ahead in a 2009 interview with the Association for the Study of Peak Oil (ASPO).

"We found that because the decline rate in world oil production was going to be in multiple percents per year, it was going to take a very long time for mitigation to catch up to the decline in world oil production. Basically, the best we found was that starting a worldwide crash program 20 years before the problem hits avoid serious problems. If you started 10 years before-hand, you are in a lot of trouble; and if you wait to the last minute until the problem is obvious, then you’re in deep trouble for much longer than a decade. As it turns out, we no longer have the 10 or 20 years that were two of our scenarios."

An expanding global population, coupled with increasing living standards and energy consumption in the developing world (particularly China and India) are all elevating the demand for oil.

Yet, as a finite resource, the supply of oil is fixed and will not be able to keep up with rising demand.

This is a point the Hirsch Report makes clear:

Some economists expect higher oil prices and improved technologies to continue to provide ever-increasing oil production for the foreseeable future. Most geologists disagree because they do not believe that there are many huge new oil reservoirs left to be found. Accordingly, geologists and other observers believe that supply will eventually fall short of growing world demand — and result in the peaking of world conventional oil production.

Though we may never fully run out of oil, we will eventually run out of cheap oil. That's when life as we've known it changes immutably.

Mr. Hirsch's expertise and advanced pedigree accord him unimpeachable authority, and that's exactly what compelled the government to commission his Peak Oil report. The fact that the Hirsch report was produced at the request of the US Department of Energy lends it all due credibility.

Hirsch started his career in the field of nuclear energy, did fusion research and ultimately managed the government's fusion program. Over the years, he also worked on renewable energy sources and managed the federal renewables program. He then went on to work in the oil industry, where he managed research on long range refining and synthetic fuels, and later managed upstream research and development—the exploration and production of oil and gas.

However, despite being commissioned by the DOE, the Hirsch Report was buried by the department because it believed the American public could not deal with the idea that its way of life might be threatened. The DOE simply determined that the public couldn't handle the report because it was just too painful.

"When they saw the final report, it shocked them, even though they could see what was coming," said Hirsch in a 2009 interview with ASPO. "When the report was done, management at NETL really didn’t know what to do with it because it was so shocking and the implications were so significant. Finally, the director decided that she would sign off on it because she was retiring and couldn’t be hurt, or so I was told. The report didn’t get widely publicized. It somehow was picked up by a high school someplace in California; eventually NETL put it on their website."

The media didn't help. Instead of running excerpts and summaries of the Hirsch Report, US newspapers and newsmagazines have generally ignored it.

In late May 2005, Hirsch presented the substance of the report at the annual ASPO Workshop in Lisbon, Portugal to an audience of about 300. The event received virtually no press coverage in the US.

However, in the six years since the report was formally unveiled, the Internet chatter has never waned. Thank goodness for the blogosphere and alternative media.

When the report was issued, Hirsch didn't take a position on when Peak Oil would occur. Hirsch says that when he got into the subject he "knew enough about the uncertainties and unknowns to feel... that I could not make a reasoned judgment early on."

Over time, as his research developed and evolved, that changed.

"I spent a number of years listening to what other people had to say, studying their analyses, and looking at what was happening in the real world before I came to a conclusion for myself... I wasn’t about to take a position on timing without having a lot of evidence that would support my position. And so it wasn’t until about [late 2007, early 2008] that I began to home in on the likely timing of the decline of world oil production being sometime within the next five years."

We've been in a race against time for years, and yet our government has showed no sense of urgency. That lack of preparation will haunt us, says Hirsch.

"[This] is going to be very difficult because people don’t like to hear bad news, and this is terrible news. And as it sinks in, markets will drop and there will be an immediate recessionary reaction because people will realize that this is such a horrendous problem that having a positive outlook on employment and the economy is just simply unrealistic."

Large scale events have a way of speeding up, especially when leaders are not paying attention. Complex systems can break down and unsustainable systems always breakdown. The implications of Peal Oil will likely be sudden and abrupt.

The Hirsch report projects that if Middle East reserves are much less than stated, life in a post peak oil world will be even worse than projected. Such a worst-case scenario may have been realized just last week.

According to leaked confidential cables from the US embassy in Riyadh, the US fears that Saudi Arabia, the world's largest exporter of crude oil, may not have enough reserves to prevent oil prices from escalating.

A senior Saudi government oil executive warns that the kingdom's crude oil reserves may have been overstated by as much as 300 billion barrels — or nearly 40% — and that this was done to spur foreign investment.

At this point, waiting for the federal government to act is futile. It's now time for local communities and even individuals to act and come up with their own plans.

The situation will not suddenly improve. It is only poised to worsen.

Posted by The Independent Report at 4:51 PM

The US economy is run like a casino and Wall St. is the house. Collateralized debt obligations (CDOs), credit default swaps (CDS) and derivatives are Wall Street's casino games. Naturally, the games are always rigged in favor of the house.
A market-based economy is wholly reliant on free markets to function properly. But we don't truly have free markets. What we have, instead, are manipulated markets.