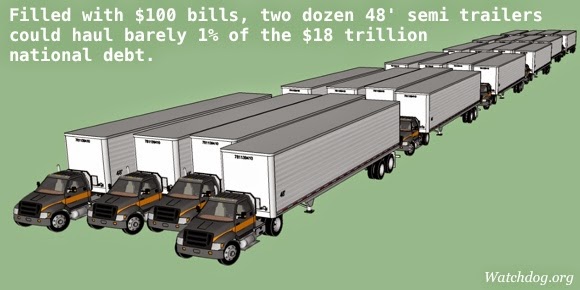 The national debt eclipsed $18 trillion. That is a number so large that it is almost incomprehensible. For the record, a trillion has 12 zeros. A trillion is one thousand billion. So, 18 trillion is 18,000 times a billion.

Chew on that for a moment.

Obviously, that number is smaller than our national debt. But, quite critically, it also means that economic growth for the year was smaller than the budget deficit for the fiscal year.

According to the Congressional Budget Office (CBO), the federal budget deficit was $506 billion for fiscal 2014, which ended on September 30.

While that’s about a third the size of the deficit in 2009, during the depths of the Great Recession, it also means the deficit for a single year still surpassed half a trillion dollars.

The only good news in this story (and there are those who are surely spinning it as good news), is that the size of our annual deficits has shrunk in recent years. But the deficit is still massive by any reasonable measure.

The deficit has fallen from more than 10% of GDP in fiscal 2009 to only 2.9% of GDP in fiscal 2014. That puts the U.S. below the 3% limit at which the European Union requires member countries to take corrective action. The CBO expects us to remain near that level for the next five years.

While this is all very good news, it does not diminish the fact that the U.S. government is still spending more money than it collects in taxes, and therefore continues to add to the underlying national debt.

To be clear, the deficit represents excess spending above tax collections in any given fiscal year, while the debt is the sum total of decades of this excess.

The federal debt held by the public should reach 74% of GDP this year — the highest percentage since 1950. That was five years after WWII, so there was a good reason for all that debt back then.

The debt held by the public must be collected with taxes to pay off our creditors (i.e., Treasury bond holders). The rest of the public debt is money the government owes to its citizens for things such as Social Security and Medicare, plus military and civil service pensions, etc.

Since the government has already collected and spent these monies, it now needs to obtain additional funds to repay these debts. The government will either collect more taxes or make cuts to other budget items to repay the debts owed to the American people.

Social Security and Medicare are technically considered liabilities, not debts. Though the government has spent all the money in the Social Security Trust Fund on other budget items — and owes that money back to the people from which it was collected — it is still not considered "debt."

Including the national debt, the government's (meaning the taxpayer's) unfunded liabilities totaled $71 trillion at the end of fiscal 2013 (Sept. 30, 2013). It has since gone higher, though no official figure is currently available.

Ultimately, this debt belongs to us — the public — as well. We owe all of it, on behalf of our government. There is no differentiating our government's debts and liabilities. The taxpayers will fund it all in the end.

In order to stop adding to the debt, the government must first end it deficits — not merely lessen them.

In 2011, Congress and President Obama negotiated $1 trillion in cuts to discretionary domestic and defense spending over nearly a decade. Yet, this “sequestration” process still left us with annual deficits.

The government is currently being spared much higher debt payments because interest rates are historically low. But when rates are this low, they have only one way to go — up.

The 10-year Treasury currently yields 2.31%. Debt-service costs will be crippling when yields revert back to long term norms. For example, over the 20-year period from 1994 to 2013, the yield on the 10-year Treasury averaged 4.60%.

Since we're continually adding to the debt, it will make that eventual reversion all the more painful.

The U.S. public debt crossed the $1 trillion mark for the first time October 22, 1981. It took 205 years to get there. We've now added another trillion in roughly one year. And that's being heralded by some as progress.

This is very troubling, and the consequences will be quite harsh at some point in the future. It doesn't matter whether it's sooner or later. Some extraordinarily large debts are coming due, and they will impact all of us. They will impact our very way of life.

Money spent servicing our debts is money not spent on health, education, or our crumbling infrastructure.

In other words, the national debt is already robbing from our nation, and it will only get worse — much worse.

But here's the rub: Our entire monetary system is based on debt. In the absence of continually growing debts, the system will collapse. Yet, under the burden of all this debt, the system will eventually collapse anyway.

That makes for one hell of a predicament.

The only solution is to change the very essence of our debt-based, fiat monetary system.

Posted by The Independent Report at 10:24 AM