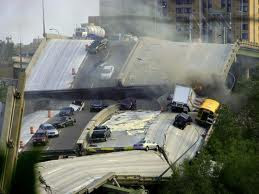 The following is Part III in a three-part series documenting 'The American Decline'. You can read Part I here and Part II here.

"Bridges collapsing, highways cracking, levees breeching, state power grids failing ... our roads, ports, dams, water systems, highways, power plants, airports, etc., are all in desperate need of new investment," the ASCE report said. "Our infrastructure has been badly neglected and has been allowed to deteriorate for far too long."

The findings were nothing new. In fact, they just highlighted a continuing pattern of disrepair and neglect.

The ASCE had previously given US infrastructure a "D" grade in 2005 as well. Getting the same grade again in 2009 just indicated a total lack of national commitment to improving these problems.

Infrastructure refers to the basic facilities and capital equipment that a society, country, state or community needs to function. These are things like power stations, utilities, roads, airports, railways, and sewers.

However, the US has an aging, crumbling infrastructure that is not prepared for the 21st Century. It is yet another economic albatross around our nation's neck. The decay is costing us heavily right now, and it will cost us even more in the future.

According to the ASCE, America's crumbling infrastructure is sapping our economy and our way of life.

The ASCE estimates that government and the private sector need to invest $2.2 trillion from 2009 through 2013 - roughly three times the size of the $787 billion stimulus package passed by Congress in February of 2009.

It should be noted that tax cuts amounted to $288 billion of the so-called "Recovery Act", and that $233 billion went toward food stamps and unemployment for those hit most hard by the Great Recession.

The remaining $275 billion went to economic stimulus, and that spending wasn't nearly enough to addresses all of the assorted problems with our nation's infrastructure. In fact, it barely scratched the surface.

The current state of our nation's infrastructure is simply unacceptable for a 21st Century, first-world, industrialized nation and it's a sign of decline.

Failing infrastructure is not the mark of a world leader; it's the mark of a country in decay. It not only lessens our competitiveness with other developed nations, but even developing ones. This cannot be ignored and it cannot be overlooked.

Without question, our nation's failing infrastructure needs to be addressed and rebuilt. The 2005 levee failures in New Orleans following Hurricane Katrina and the 2007 Minneapolis bridge collapse are symptoms of our broken and decaying infrastructure.

After that tragic bridge collapse (which killed 13 people and injured 145), more than 73,000 US bridges were rated structurally deficient by the Federal Highway Administration and another 80,000 were rated functionally obsolete.

The problem is that the US is already running massive annual budget deficits and is burdened by a cumbersome national debt exceeding $13 trillion. Our politicians have squandered our national wealth and the opportunities to address these problems for many years. This decay didn't just happen overnight.

It's worth remembering that Hurricane Katrina swept away New Orleans and much of the Gulf Coast region five years ago, and the federal government still hasn't rebuilt the region or replaced New Orleans' failed levees.

If the US doesn't have the money (or the will) to rebuild the Gulf region, what happens when the "Big One" strikes LA or San Francisco?

These investments are long overdue, and if they are not made immediately our economic problems are guaranteed to worsen.

Yet, these investments won't be made because maintaining tax cuts and slashing spending are politically in vogue at the moment.

However, repairing, rebuilding and modernizing our national infrastructure would also create jobs, increase demand, and circulate money back into the US economy and tax base.

Whatever the cost, the price of not investing is even higher.

If we're not motivated or inspired by the long term economic impact of failing to make the necessary investments needed to correct these shortcomings, and prepare for the century we're already living in, then maybe the human cost will spur us.

When it comes to infrastructure, real, actual human lives are on the line. Just ask the citizens of Minneapolis and New Orleans.

Here's a look at the American Society of Civil Engineer's 2009 report card on America's infrastructure; it's simply awful.

Roads; D-
One-third of the nation's major roads are in poor or mediocre condition.

Drinking water: D-
Leaking pipes waste 7 billion gallons of clean drinking water every day, and many aging facilities are near the end of their useful life.

Waste Water: D-
Billions of gallons of untreated waste water are discharged into the nation's waterways each year.

Levees: D-
More than 85% are locally owned and the reliability of many is unknown, though increased development near levees has increased the number of lives at risk.

Energy infrastructure: D+
This was the only sector to show improvements since the last ASCE report card in 2005.

Solid waste: C+
The highest grade on the list, due to recycling efforts.

What all of this clearly indicates is that our nation has fallen behind in the world and continues to decline.

The lack of infrastructure maintenance and modernization was seen most recently in San Bruno, CA, where an entire neighborhood was wiped out after a half-century-old gas line ruptured and exploded. The blast destroyed 38 homes and killed seven people.

State and local governments around the US are expected to spend roughly $150 billion a year on infrastructure during the coming decade. Meanwhile, Congress has yet to approve nearly $500 billion in proposed infrastructure spending over the next six years. That amounts to just over $83 billion per year, a paltry sum by modern US standards.

Even the Chinese suggested this amount should be doubled in preference to quantitative easing since it would provide more jobs.

While the US is underfunding its crumbling infrastructure, other nations are not.

According to The Journal of Commerce, infrastructure spending in Asia (not including Japan) could total roughly $1.4 trillion in the next two years, with China committing $585 billion or more. India is also projected to spend more than $500 billion by 2015.

That kind of government investment will only spur even greater private investment, as those nations are continually seen as the rising economic giants of the 21st Century.

The 20th Century was called the 'American Century'. Absent adequate, effective and dedicated infrastructure spending that keeps up with the times, the same will not be said of the US in the 21st Century.

Posted by The Independent Report at 3:38 PM