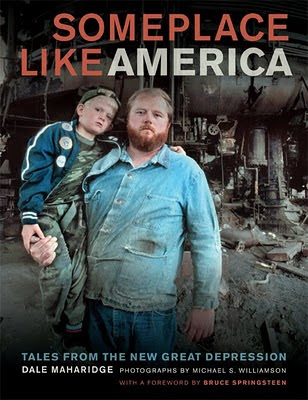 Economically speaking, the U.S. remains in the midst of a perfect storm.

The nation is plagued by a vicious cycle of slower growth, leading to lower tax revenues, followed by spending cuts, ultimately resulting in even slower growth.

According to the National Bureau of Economic Research — which declares such things — the economy is not officially in a recession. But it couldn't be much closer.

And to huge swaths of this nation, the recession never really ended; it morphed into a depression.

Economic growth needs to be at least 2.5% to improve the nation's dismal unemployment situation. Anything lower doesn't even keep up with population growth.

There are numerous reasons for this economic breakdown.

Since their 2006 peak, home prices have now fallen further in percentage terms than they did during the Great Depression. And it took 19 years for prices to fully recover after the Depression. That's an ominous precedent.

As it stands, some 6.5 million homes have already been lost to foreclosure. In addition, another 2.16 million properties are presently in foreclosure, representing a combined $1.27 trillion of unpaid principal.

As if all of that wasn't bad enough, there are an additional 4.3 million homeowners who are now “seriously delinquent,” meaning they are more than three months behind in their payments. Many of those homeowners will soon enter the foreclosure pipeline.

All of these foreclosures are deflating home values and sales prices. That's bad for all homeowners.

By the end of last year, about 11.1 million households, or 23.1 percent of all mortgaged homes, were underwater.

Due to the housing bust, millions of households have seen their equity wiped out. That's been a major factor in diminished consumer spending.

Additionally, after borrowing heavily for a decade, Americans are now grappling with mountains of debt. People are opting to pay with cash instead of credit and, rather than going even further into debt, are putting off purchases they can't afford.

Though the Fed has kept borrowing rates near zero for three years, there's very little it can do to stimulate demand for credit that no one wants.

Millions of Americans currently qualify for record low mortgage rates. It's just that most of them aren't interested in borrowing. No matter how low rates are, it's tough to make a monthly payment without a job. And millions more are unwilling to take on a mortgage when they're worried about losing the job they already have.

This leads us back to the other major factor crimping consumer spending; unemployment.

The government's most widely reported unemployment figure (U-3) currently stands at 9.1 percent. However, that number does not include people who have lost their unemployment benefits, or those who can only find part-time jobs even though they want full-time work.

With all of these factors in mind, it was little surprise that U.S. consumer confidence fell to 44.5 in August, the lowest level since April, 2009, more than two years ago.

However, when the Consumer Confidence Index fell to 47.7 in 2009, it was at its lowest level in more than a quarter century, and it is now even lower than that.

A reading above 90 indicates the economy is on solid footing; above 100 signals strong growth. Obviously, we are a long way from that.

Low confidence creates a downward spiral in which consumers don't spend and the economy continues to further weaken. Consumer spending accounts for 70 percent of U.S. economic activity, which is why consumer confidence is so critical. It is a bellwether of this nation's economy.

As long as consumers are unwilling or unable to spend enough to spur economic growth, there will not be enough demand to create new jobs. It's a vicious cycle that is very tough to break.

The lack of buying power isn't merely the result of the 14 million Americans who are currently unemployed. Many of those who currently have jobs are actually making less than workers did four decades ago.

According to the latest Census figures, the median annual income for a full-time, year-round, male worker in 2010 was $47,715. That was nearly three percent less, in inflation-adjusted dollars, than the $49,065 those workers earned in 1973.

This means that median male incomes have gone backward in the intervening decades, an absolutely stunning development.

All of these factors will keep the government hamstrung in its attempts to get the economy out of the doldrums. The $787 stimulus bill didn't work, and 37 percent of that was tax cuts (something Republicans love to ignore).

The payroll-tax cut hasn't worked either. Wage earners will take home roughly $1,000 in payroll tax breaks this year, but it hasn't made a difference in the overall economy. That's because households and small businesses tend to save a greater proportion than they spend when a tax break is only temporary.

People are naturally inclined to save for an emergency when it seems like one is lurking around every corner.

Ultimately, cutting income taxes even further will not solve our economic problems. The reality is that federal tax rates are already historically low, and it's still not stimulating the economy.

The top rate is presently 35%, established in the cuts initiated by President George W. Bush. Rates this low have not been seen in two decades.

The suggestion that cutting taxes creates jobs is thoroughly discredited by historical facts.

On the other hand, George W. Bush cut taxes and the economy created just 3 million new jobs in eight years.

The U.S. economy experienced lengthy periods of robust growth in the 1940s, '50s and '60s, when top marginal rates exceeded 90%.

This is not an argument for higher rates, but a reality check for those whose answer to every economic problem is to simply cut taxes even further.

The Federal Reserve is now essentially out of bullets in its battle to get the economy moving again. Interest rates can't go any lower than zero, and the Fed has already flooded the financial system with over $2 trillion. Yet, the economy is just treading water and trying to stay afloat.

Without an economic resurgence, fueled by more jobs, leading to more workers paying taxes, the government's deficit and debt problems will not only persist, but will worsen.

It's understandable if your head is still spinning after reading this alarming fact.

This means that huge portion of the U.S. workforce is no longer productive, which is a death blow to any economy.

It's little surprise then that poverty hit new record in the U.S last year. The 46.2 million Americans living below the poverty line is the highest number in the 52 years of reporting.

Sooner or later, the realization that we are in the midst of a long term depression will fully sink into the national conscience. Tens of millions of Americans already recognize this. Those who don't eventually will.

According to a CNN/Opinion Research Corporation poll conducted in June, nearly half of Americans (48%) think the U.S. is likely to slip into another Great Depression within the next 12 months.

That's not pessimism; it's realism.

Posted by The Independent Report at 12:05 PM