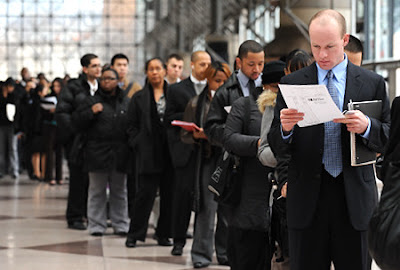 The fact that the U.S. economy created zero jobs in August is an ominous sign for a nation that needs to create 125K each month just to keep up with population growth.

Though the unemployment rate held steady at 9.1 percent, more than 14 million Americans remain out of work and actively looking for jobs.

The economy has created less than 100,000 jobs for four straight months. As if that weren't enough, on Friday, the government also said job creation in June and July wasn’t as good as originally thought.

The government claims that the labor force participation rate — the percentage of people employed and those who are unemployed but seeking a job — is currently at 64 percent, up a tiny bit from July. That is very low by historical standards.

When the recession began in December of 2007, 66 percent of Americans were participating in the labor force.

However, if you compare the labor force participation rates with the employment population ratios (EPR) for 1973 and 2000 versus today, the current numbers don't really add up.

In a recent blog post, Vox Day put it this way:

Is it reasonable to believe that people are any less inherently willing to work in these difficult economic times than they were in the year 2000? I don't see any justification for it.

Given that the percentage of women participating in the labor force has methodically risen from 44.7% in 1973 to 59.2 in 2009, and that this increase has outpaced the exit of elderly men from the labor force since 1973, the current overall participation rate should be significantly higher than it was in 1973. But this is not the case, according to the BLS.

Now, if we simply compare the present number of reported employed to the present size of the civilian, non-imprisoned population, but calculate the labor force based on the 2000 participation rate, we get an unemployment rate that is 50 percent higher than the currently reported rate of 9.1%. Note that numbers given are in thousands as per the BLS.

This means the current U3 unemployment rate according to the BLS metric should be 13.7%, not 9.1%. Note that this is higher than the "unemployment rates" reported in the first two years of the Great Depresion, 1930 (8.9%) and 1931 (13.0%). Please also note that the two historical "unemployment rates" are estimates made well after the fact as the BLS didn't track unemployment statistics until 1948. Finally, one also must take into account that the current rate would be considerably higher were it not for the 2,868,000 more people that are now employed by the federal government than were employed in 1940, much less before the New Deal of 1933. Including these extra 2.8 million government workers in the unemployed list, as one must do in order to make a reasonable comparison between 2011 and 1930-31, indicates a comparable "unemployment rate" of at least 15.5%.


It's important to remember that even if the economy simply kept up with population growth by adding 125,000 jobs each month (for a total of 1.5 million new jobs this year), it still wouldn't help the roughly 24 million Americans who are already unemployed or under-employed, meaning they can only find part-time work.

To provide some perspective of the hole we're in, consider this: the government said that 1.3 million jobs needed to be created every year from 2006-2016 just to keep up with the growing labor force.

The stark reality is that there are 7 million fewer workers today than just four years ago and the number of unemployed Americans has roughly doubled, to more than 14 million.

The current state if affairs is nothing new; job creation has been in a long-term downturn.

Astonishingly, job growth in the last decade was actually negative. While the number of new workers entering the workforce swelled during that period, just 1.7 million new jobs were generated.

According to the Bureau of Labor Statistics, just 1.1 million jobs were created last year. Remarkably, that was nearly as many as in the previous decade combined.

The troubles go back many, many years. In fact, job creation has been slowing for decades, and that's a very bad omen.

According to the Economic Cycle Research Institute, during periods of American economic expansion in the 1950s, ’60s and ’70s, the number of private-sector jobs increased at about 3.5 percent a year. But during expansions in the 1980s and ’90s, jobs grew just 2.4 percent annually. And during the last decade, job growth fell to 0.9 percent annually.

And it's taking longer and longer to recover from each successive recession. The last time the jobless rate reached double digits, in the early 1980s, it took six years to bring it down to normal levels.

The historical precedents and current trends make it very difficult to feel optimistic about the future.

This nation's unemployment problem has truly negative consequences for our consumption-based economy, which is 70% reliant on consumer spending. Obviously, there is less consumption when fewer people are working, as there is less disposable income directed back into the economy. It also means lower tax receipts at both the state and federal levels.

If unemployment remains stubbornly high, wages will also remain stagnant. That will create a negative feedback loop of both lower both consumer spending and economic output.

American consumers remain totally strapped due to their heavy debt burdens. Consequently, we will not spend our way out of this malaise.

Our unemployment problem is huge and complex. Millions of lost jobs are never coming back. As a result, millions of American workers need new skills and new training.

Therefore, the problem is much bigger than creating the 1.5 million jobs needed to keep up with annual population growth.

Even if the nation had started adding 2.15 million private-sector jobs per year beginning in January of 2010, it would have needed to maintain that pace for more than seven consecutive years (7.63 years), or until August 2017, just to eliminate the current jobs deficit.

It's now abundantly clear that this isn't going to happen.

Our present economic state is quite bleak. Sadly, for most Americans the future is virtually certain to be less prosperous than the past.

These are hard times indeed. And they are poised to remain that way for the foreseeable future.

Posted by The Independent Report at 11:04 AM