Food Stamp Use Rising With Poverty 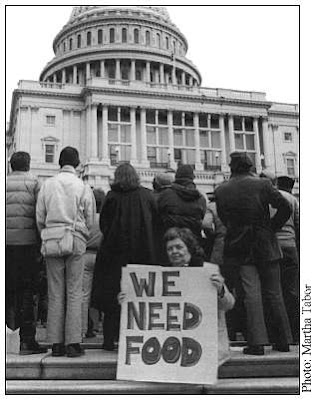 The times are tough now, just getting tougher
This old world is rough, it's just getting rougher
— Bruce Springsteen, 'Cover Me'

The Great Recession has left quite a scar on this nation. Rampant unemployment has led to rising poverty and homelessness, plus an increase in the number of Americans needing government assistance just to buy food.

Since 2007, the number of people in the Supplemental Nutritional Assistance Program (SNAP) has increased by 74 percent. SNAP is the new name for food stamps, though most people still refer to the program by its former name.

At present, some 46 million people in the United States use food stamps, roughly 15 percent of the population. To put it another way, that's more than one-in-six Americans.

That tally squares with the government's revelation that 44 million Americans were living in poverty last year.

Bill Simon, head of Walmart's U.S. operations, told a conference call recently that the company had seen an increase in the number of shoppers relying on government assistance for food.

With so many people receiving assistance, the cost of the program doubled to $68 billion in 2010. That's a problem for a government as deeply indebted as ours, and one that has seen its safety net expenses spike at the same time its revenues have plummeted.

In fact, the cost of food stamps amounts to more than a third of what the government received in corporate income taxes last year.

Unemployment has had the duel effect of raising the number of Americans seeking assistance while simultaneously shrinking the tax base. It's been a real double whammy.

However, not everyone receiving food stamps is unemployed. In fact, many have jobs. The problem is that they are low-paying jobs.

About forty percent of food stamp recipients are in households in which at least one member of the family earns wages. That's a big change from two decades ago.

A looming prospect for the government is that the cost of the program could grow even if the economy doesn't worsen. The government estimates that one in three eligible Americans are not presently in the program. That's a troubling reality.

The maximum amount a family of four can receive in food stamps is $668 a month. The benefits can only be used to buy food — though not hot food — and for plants and seeds to grow food.

Low wages and rising poverty are behind the large increase of Americans needing food assistance. While there may indeed be some fraud, the fact that wages have been stagnant for nearly four decades has manifested itself in some rather stark ways.

Due to their low incomes, minimum wage single parents are almost always eligible for food stamps. Assuming they work 40 hours every week of the year, a minimum wage worker earns about $15,000 annually. An $800 per month apartment would eat up nearly $10K of that income.

But it's not just minimum wage earners that often need food assistance. Even those who earn $10, $11 or $12 an hour typically face enormous challenges in supporting their families.

Based on a 40-hour work week, someone who earns $12 per hour would gross about $25,000 before taxes. That comes out to less than $500 per week, which obviously doesn't go far for a family of three or four.

The federal poverty level for a family of four this year is $22,350. However, it's probably fair to say that millions of families earning more than that amount are still living in poverty.

With an unemployment rate over 9 percent, many people are taking jobs for which they are grossly over-qualified, including people with advanced degrees. Workers are now competing for low wage jobs that keep them in poverty and on government assistance.

Take Walmart, the nation's largest private employer, for example. It's sales associates and cashiers typically earn around $9 per hour. For a full-time worker, that amounts to $360 per week, or $18,720 annually.

The same types of wages would typically be expected for similar retail workers and fast-food employees. The U.S. is now primarily a service sector economy, highlighted by low-paying, unskilled jobs. Service sector jobs are also the kind that don't produce anything, other than cheap, fast food, for example.

According to the Bureau of Labor Statistics, from 2008 through 2018, "The shift in the U.S. economy away from goods-producing in favor of service-providing is expected to continue. Service-providing industries are anticipated to generate approximately 14.5 million new wage and salary jobs."

That's not a good tend. The middle-class was not built on low-paying service sector jobs, but rather on well-paying manufacturing jobs with good benefits. As of last year, the service sector was responsible for $11.2 trillion of U.S. GDP.

The unvarnished reality is that the richest 1% of this nation own a third of the country's assets and the poorer 50% owns less than 2.5%.

As long as that remains true, the number of Americans receiving food stamps is only likely to grow.

Posted by The Independent Report at 3:20 PM