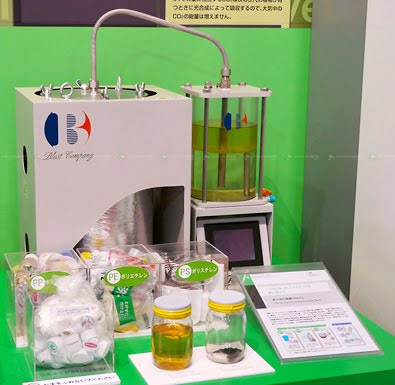 Japanese inventor Akinori Ito sees plastic shopping bags as the “fuel of the future”. Since plastic bags are made from oil, Ito developed a machine that reverts them (and other plastics) back to their original form.

Ito is the CEO of Blest, a Japanese company that produces these intriguing machines in various sizes, with applications ranging from industrial purposes to simple home use.

At the industrial level, this is not a novel technology. However, at the consumer level, it is indeed a breakthrough.

The smallest version of the Blest Machine will fit on a countertop and currently costs $12,700. However, Ito hopes that through increased production the price will drop so that "anyone can buy” one.

This technology converts 1 kilogram (about 2 lbs.) of plastic into 1 liter (about a quart) of oil using just 1 kilowatt of power, at a cost of about 20 cents.

One liter of gas is essentially nine kilowatt-hours of energy — enough to drive a typical car eight miles, or run ten 100-watt bulbs for nine hours.

The conversion process reveals the fuel potential of plastic, which could become a coveted commodity and boost recycling efforts immensely. If plastics are viewed as a resource rather than waste, the results would be rather positive.

Non-biodegradable plastic waste is overflowing from dumps and landfills all around the world. And it's also polluting our oceans. Sadly, the global recycling rate for plastic is quite low.

For example, each year America uses 380 million plastic bags and only 7 percent of them are recycled. If we can convert an everyday waste product into a source of fuel, it would greatly decrease the amount of plastic piling up in landfills.

It's estimated that 7 percent of the world’s annual oil production is used to produce and manufacture plastic. So the idea is to utilize existing plastic waste, of which there is an abundance.

As noted, Ito's conversion system is made for households and could allow consumers some measure of energy independence. Producing fuel locally would greatly lower the carbon footprint that results from transporting petroleum from distant countries.

The Blest Machine can convert several types of plastic back into oil. This promising contraption is capable of processing polyethylene, polystyrene and polypropylene (numbers 2-4) but not PET bottles (number 1).

The result is a crude gas that can fuel things like generators or stoves. Further refining produces gasoline, kerosene and diesel, meaning it can also fuel autos.

Burning plastic trash typically creates both toxins and CO2. However, Ito's device uses an electric heater in place of a flame. So while the plastic melts, nothing is directly burned.

As a result, Ito says that no toxic substance is produced in the conversion. Though methane, ethane, propane and butane gasses are released in the process, the machine is equipped with an off-gas filter that disintegrates these gases into water and carbon.

The invention is a carbon-negative system and is therefore non-polluting. The self-contained process heats up the plastic to about eight hundred degrees Fahrenheit, traps the vapors and channels them through an intricate system of pipes and water chambers. These, in turn, cool the vapors and condense them back into crude oil.

No, the Blest Machines will not solve our energy problems. But they can be part of the solution. Yes, the fuel created does give off CO2 as part of the combustion process, like any other carbon-based fuel.

However, it encourages recycling, eliminates non-biodegradable plastic waste, and lessens our dependence of traditional oil.

Plastic is potential oil. Since it is derived from oil, converting plastic back to its original form reduces the need for further oil production.

Perhaps the best news is that Ito's invention uses less than one kilowatt-hour per batch of plastic. A power plant uses three kilowatt-hours to deliver one to the Blest Machine, but it's still a net six kilowatt-hours.

Posted by The Independent Report at 1:56 PM