U.S. Economic Growth Has Been Slowing For Many Years 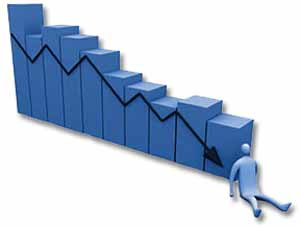 With the global economy decelerating and much of Europe already in recession, the focus has shifted to China, where a series of recent indicators reveal that the world's second largest economy is also slowing.

For example, Chinese manufacturing contracted in September for the 11th consecutive month, according to the HSBC purchasing manager's index (PMI). The HSBC PMI was 47.9 for September, slightly up from 47.6 in August. The index measures manufacturing activities on a 100-point scale, on which numbers below 50 show a contraction. The August reading was the lowest level since March 2009 — a 41 month period.

China's National Bureau of Statistics reported Thursday that gross domestic product grew 7.4% in the third quarter compared to a year earlier, slowing from the second quarter’s 7.6%. It marked the slowest pace of growth since the first quarter of 2009.

However, though China's growth is indeed slowing, it is still extraordinary by any measure.

What's truly remarkable is that a growth rate of 7.4% is actually part of a slowing trend. Such a reading in the U.S. would be historically exceptional and greeted with national jubilation.

Here are the top five years of GDP growth since 1948:

As you can see, it's been three decades since the U.S. economy grew at a pace even resembling China's, which is currently slowing.

Yet, since 1973, the U.S. economy has experienced slower growth, averaging 2.7% annually. Meanwhile, household incomes increased by just 0.3% annually over that period.

That stagnation, coupled with persistent inflation, has hurt growth and lowered the standards of living for millions of Americans.

At the same time, the ballooning national debt now exceeds $16 trillion. Typically, the US would attempt — or hope — to grow its way out debt. However, that seems to be an impossibility at this point with the rates of growth and debt moving in opposite directions. The federal debt will continue to increase at a faster pace than the economy can grow.

If not for all the government spending in recent years, the U.S. economy would still be in recession. Excluding the government's unbridled deficit spending, real GDP has been flat for 15 years. In fact, without the growth in government debt, the U.S. would likely be experiencing a depression.

Advanced economies are mature economies, and therefore harder to grow. The sad reality is that growth has been rather slow for a number of years and we may have now entered a long-term period of lower growth and higher unemployment.

Since the second quarter of 2006, there has only been one quarter in which GDP was at least 4% — the fourth quarter of 2009. Yet, that 5.6% growth rate was largely the result of government stimulus spending.

The problem is that economic growth needs to be at least 2.5% to improve the nation's dismal unemployment situation. Anything lower won't even keep up with population growth.

The U.S. economy needs to create 250,000 new jobs per month for a year to drop the unemployment rate by a little more than 1%. However, in order for that to happen, the economy needs to grow north of 3% per year. That kind of expansion is proving to be increasingly difficult.

According to a recent McKinsey Global Institute study, the economy is likely to remain slow for decades to come.

McKinsey argues that the economy is likely to remain slow because as labor force participation drops—as more and more baby boomers retire and the number of new women entering the workforce slows—Americans who do work will have to support the increasingly large proportion of Americans who don’t.

Moreover, the decline in spending associated with the progressive retirement of the Baby Boomers will reverberate through the economy and create a major drag on growth.

The lack of adequate job creation conflates with our nation's slowing growth. In fact, the two are creating a feedback loop. Job creation has been slowing for decades and that's a very bad omen.

According to the Economic Cycle Research Institute, during periods of American economic expansion in the 1950s, ’60s and ’70s, the number of private-sector jobs increased at about 3.5 percent a year. But during expansions in the 1980s and ’90s, jobs grew just 2.4 percent annually. And during the last decade, job growth fell to 0.9 percent annually.

And it's taking longer and longer to recover from each successive recession. The last time the jobless rate reached double digits, in the early 1980s, it took six years to bring it down to normal levels.

The historical precedents and current trends make it very difficult to feel optimistic about the future.

For decades, the U.S. has been losing jobs to developing nations (i.e. China) due to their lower labor costs. This off-shoring has particularly decimated the manufacturing sector and led to a massive trade imbalance.

Since 1976, the US has sustained trade deficits with other nations. Simply put, we buy more from abroad than we sell abroad. This is largely because exports account for just 12 percent of GDP and manufacturing just 11 percent of GDP.

A trade deficit acts as a drag on economic growth because it means the U.S. is earning less on overseas sales of American-produced goods while spending more on foreign products.

Such an imbalance has been able to exist for 36 years only because the U.S. has run a surplus in the trade of services (tourism, financial services, telecommunications, etc.). However, the overall trade deficit is unsustainable in the longer term.

These problems are not easy to rectify. They can't be fixed in a quarter, a year, or even during a president's term. These are structural problems, not merely cyclical ones. They have been decades in the making and at this point they seem to be baked into the cake.

The growth of the U.S. economy over the past 30-plus years was all funded by unsustainable consumer debt. Those days are over.

The reality is that you can forget the notion of the U.S. growing its way out of debt. Economic growth simply can't keep up with new federal debt. But that's almost besides the point.

Based on the very nature of our monetary system, perpetual debt is a way of life. All money is loaned into existence. But only the principle — not the interest — is created. The entire system is out of balance from the outset.

To offset weak levels of growth, there has been an exponential expansion of the monetary base (the money supply), courtesy of our central bank. All of this freshly created money erodes the value of the dollars in our pockets and bank accounts. It's a matter of too much money chasing too little demand for goods and services — the byproducts of a slow economy.

The central bank has also forced near-zero interest rates upon us. Federal Reserve policy has forced millions of Americans — including retirees — to make big gambles with their life savings. Low rates have pushed them into buying risky assets in the quest for returns that will beat inflation.

What is going on in the U.S. is a massive reordering; a historic, economic correction that has the potential for an eventual monetary collapse.

While our economic growth trend has been slowing for many years, China's has taken off like a rocket.

Yes, China's growth rate is unsustainable. But even if its growth falls to 6% annually — a major decline from current levels — it would still be more than twice the present U.S. growth rate.

The major story of our era is that the United States, which has dominated the world’s economy for several lifetimes, is in relative decline. According to International Monetary Fund calculations, the U.S. is on track to lose its status as the world’s biggest economy — when measured in real, purchasing-power terms — to China by 2017.

That would be a stunning development, but not an unforeseen one. We've already been warned.

Posted by The Independent Report at 10:12 AM