Global Oil Demand Will Spike Over Next 24 Years

According to the U.S. government, global oil consumption is likely grow by more than than 25 percent over the next quarter century.

In its annual international energy outlook, the US Energy Information Administration (EIA) said world oil demand is expected to climb to 112.2 million barrels per day in 2035, a 27 percent increase from the current level of 88.20 million bpd.

Here's the kicker: the anticipated increase in conventional oil production would meet less than half of this growth, at 11.5 million bpd.

That leaves a gap of 24 million barrels each day.

Where will all of the additional oil be found to meet this growing demand? As it stands, average annual global crude oil production has been flat since 2005. That does not bode well for the future. 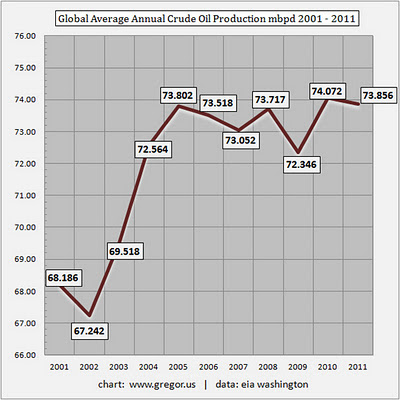 The EIA said that most of the projected growth in liquid fuels "is in the transportation sector, where, in the absence of significant technological advances, liquids continue to provide much of the energy consumed.”

The EIA’s projections were based on current government policies and do not include any proposed or potential regulations, including the recently announced US fuel economy standards that would force automakers’ fleets to average 54.5 miles per gallon by 2025.

However, there would need to be a massive national initiative geared toward conservation to offset the rapidly escalating global demand for oil and oil-based fuels.

The EIA sees total global energy use increasing 53 percent over the next 24 years, led by developing nations such as China and India. Last year the agency predicted a 49% increase.

As it stands, developing nations already use slightly more energy than those in the developed world. And by 2035, they are expected to use double.

The agency predicts that fossil fuels will continue to be the dominant fuel choice in 2035, with renewables constituting just 14% to the world's overall energy consumption.

So much for any hopes of a green energy renaissance that might solve the world's energy predicament, or curb the rise in greenhouse gas emissions.

The agency says that most future renewable energy supply will continue to come from wind and hydropower. Nuclear power is expected to go from about 5% of overall energy consumption in 2008 to about 7% in 2035.

It's hard to feel encouraged by anything in this report. It reveals a future of continually growing oil demand that is no way matched by supply. It reveals tremendous, and increasing, global competition for finite energy resources. It reveals an explosive rise in greenhouse gas emissions and a continued reliance on dirty fossil fuels.

One obvious conclusion can be derived from this report: energy prices are sure to climb, and this will negatively affect the global economy. The oil gap, in particular, will wreak havoc — particularly in the US, which is a heavily dependent oil economy.

Another very obvious conclusion is that the future will be very different from the present world we live in.

Posted by The Independent Report at 8:11 AM