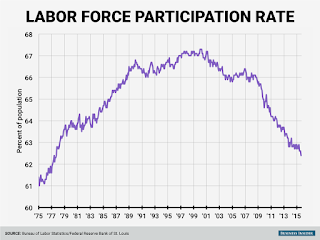 The US economy created 142,000 jobs in September, following a revised 136,000 gain in August, which was lower than previously estimated.

This raises the real concern that the economy may be slowing.

However, the glaring issue is that a record 94,610,000 Americans were not in the American labor force last month — an increase of 579,000 from August, which had been the previous record increase.

The labor force participation rate, which indicates the share of the working-age people in the labor force, decreased to 62.4 percent from 62.6 percent. That was the lowest since October 1977.

When the Great Recession officially began in December 2007, the proportion of adults who either have a job or are looking for one stood at 66 percent. This means that, eight years later, roughly 8 million fewer people are now in the workforce.

The number of Americans in the labor force has continued to fall partly because of retiring Baby Boomers, and because fewer workers are entering the workforce.

The Congressional Budget Office says about half the decline is due to the aging population. Roughly 10,000 baby boomers turn 65 every day, and many of them retire.

Again, the retirement of the Baby Boomers is only half the reason that the labor force participation rate continues to fall.

This raises a thorny issue -- a whopping number of Americans are no longer productive and helping to support the economy.

In September, there were 156,715,000 people (age 16 or older who were not in the military or an institution) participating in the labor force by either holding a job or actively seeking one, according to the Labor Department’s Bureau of Labor Statistics.

Let me put this in a clearer perspective:

In essence, there are just 1.66 workers for every non-worker.

There is no good way to spin this. It’s just not healthy for our economy.

Even if you attribute the problem solely to the retiring Baby Boomers (which isn’t entirely so), that means it is a long-term, structural problem without a solution. It is something that just needs to play itself out over many years.

However, 1.9 million people were marginally attached to the labor force in September, meaning they were not in the labor force but wanted and were available for work, and had looked for a job some time in the prior 12 months.

Additionally, there were 6 million people employed part time for economic reasons (involuntary part-time workers) in September. These individuals, who would have preferred full-time employment, were working part time because their hours had been cut back or because they were unable to find a full-time job.

The economy simply cannot fire on all cylinders with nearly 8 million people out of the workforce for involuntary reasons. These folks can’t propel demand, increase consumption, or drive economic output.

Yet, those figures don’t even include the 8 million who are officially listed as unemployed (the unemployment rate remained at 5.1 percent in September).

Taken as a whole, it means that 16 million Americans are either unemployed or under-employed.

Many of these people are reliant on government assistance to get by. That robs from the economy rather than adding to it. Fewer workers result in less economic growth.

The more people who are either too young or too old to work leaves fewer working-age people to support them and contribute to the economy. This is what’s know as the “dependency ratio.” The higher the ratio, the worse it is for the economy.

This is not a political screed. It is not meant as an indictment of the president, or either political party.

So, if you hear anyone (namely a candidate for president) say this is a problem with an easy solution, and that he/she will just “get” our economy back to its historic average, or even up to 4 percent annual growth (as some have suggested), don’t believe it for a minute.

This is a long-term, structural problem with no solution other than the passage of time.

The Baby Boomers are defined as the generation born between 1946 and 1964, and they comprise nearly a quarter of the US population — or more than 75 million people.

While they were once were an unprecedented economic force, that is no longer the case.

With the Social Security retirement age now age 67 for anyone born after 1960, the last of the Baby Boomers won’t retire until 2031 — 16 years from now.

But, again, the retirement of the Baby Boomers is only half the reason for the fall in the labor force rate, according to the Congressional Budget Office.

The other half is due to an education and skills gap, and that won’t be easy to fix either.
Posted by The Independent Report at 1:41 PM