Japan's Awful Demographics are Leading to Its Steady Decline 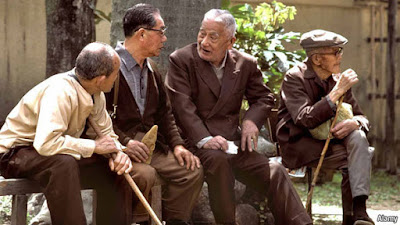 Japan has a major demographics problem.

The country has the oldest population, and the highest proportion of age 65+ adults, in the world. In fact, the size of Japan’s senior population is unprecedented in world history.

Seniors make up a significant portion of Japan's population. According to the latest estimates from Statistics Japan, over a quarter of the population is over the age of 65 and nearly 13 percent are over 75.

Think about that for a moment. Japan is the world’s first mass-geriatric society.

However, a UN projection estimates that by 2050, Japan will have around 1 million centenarians. That is a population bomb of very old people.

Yet, the overall population is shrinking.

Young Japanese couples have lost interest in having children, to the degree that it is bringing down the population. It's not a new phenomena; it's been going on for decades.

So, the population is simultaneously getting smaller and significantly older.

This is already affecting pensions, health care, and long-term care, all of which have enormous costs. That’s bad news for an economy that has been struggling for decades.

Japan has the highest life expectancy for women in the world, at 87, and falls in the top 10 for men, at 80.

With the second lowest birthrate in the world (behind Germany), how will Japan care for this tsunami of seniors?

Japan’s birthrate of 1.42 is far below the 2.07 deemed necessary to maintain the population — a level that has not been recorded in Japan since 1973.

Last year, the nation suffered the largest natural decline in its population as the number of newborns hit a record low and the number of deaths rose to a postwar high — a reflection of the rapid aging of the population.

Even if the fertility rate picks up, the pool of women of child-bearing age itself is shrinking so there will still be fewer babies born.

The social implications of this concurrent collapse in the birthrate, and the huge rise in the number of seniors (even centenarians), come with major economic implications.

The number of young working adults isn’t nearly large enough to support the huge number of older, non-working adults. The nation’s social security system could collapse under the weight of this.

The basic math simply does not add up. It's clear that most of Japan’s seniors will have to find a way to keep working.

The large number of deaths in Japan is having other consequences as well.

As its population dwindles, more and more residences are being abandoned and left in disrepair. There are now eight million vacant homes in Japan, the New York Times reports. That’s significant for a nation of 127 million people.

Japan’s debt is already at about 245 percent of its annual gross domestic product, and the International Monetary Fund has warned that its debt will be three times the size of its economy by 2030, unless the government acts now to control spending.

However, the country has been battling deflation for two decades, and the government has used fiscal and monetary policy to help raise the country out of its economic doldrums. But it hasn’t done much except to raise the nation’s debt to unsustainable levels.

Japan’s economy contracted at an annualized rate of 1.6 percent in the second quarter (April-June) as exports slumped and consumers cut back on spending.

Living standards have steadily eroded and per capita incomes today are 10 percent below the level of 1990, which is likely why Japanese couples stopped having kids.

The economic decline has surely created a depressing environment for the Japanese people, particularly for younger workers who will not have the same economic freedoms as their parents.

That’s aside from the fact that China overtook Japan to become the world’s second biggest economy in 2010. Japan had held the number two spot, behind the US, since 1968, when it overtook West Germany.

That was surely a huge psychological blow to the society, which witnessed its standing in the world decline in a measurable way.

Japan’s tax base is shrinking along with its population, which makes its debt all the more cumbersome. How much longer before the country faces a full blown debt crisis is hard to tell, but it seems like just a matter of time.

The only good news for Japan is that most of its debt is owed internally, rather than externally.

No matter, debts are always expected to be repaid. That's a troubling assumption for such an indebted nation, especially one with such awful demographic problems.
Posted by The Independent Report at 3:06 PM