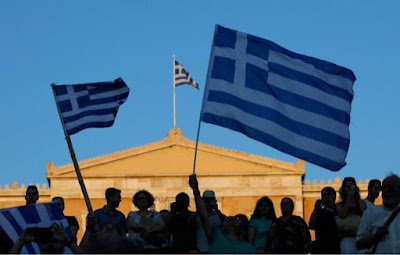 By a vote of 61 percent to 39 percent, Greek citizens chose in a referendum not remain permanently indebted to their government's creditors, with no hope of economic recovery.

The Greek economy has been shattered, gripped by spiralling unemployment and poverty. The nation is suffering through a full blown depression.

Yet, the crisis in Greece is growing worse. Even limited amounts of cash are drying up, with no prospect of an immediate infusion from its former creditors. The government imposed restrictions to stem a bank run after the referendum vote was called and its bailout program expired.

Banks remain closed and ATMs have little cash. Without more liquidity assistance from the ECB to Greek banks, Greek citizens might not be able to withdraw even the meager 60 euros ($67) allocated per day.

While banks are scheduled to re-open Tuesday, that remains in doubt. Without assistance, there will be no cash for clerks to handover to bank customers.

Greece is so starved for cash that it could be forced to start issuing its own currency and become the first country to leave the 19-member eurozone, established in 1999.

The harsh, unrelenting austerity dictated by the “Troika” – the International Monetary Fund, the European Union and the European Central Bank – pushed the Greek economy into a death spiral, with no chance for recovery.

Huge cuts in government spending helped to create an economic catastrophe in Greece, reducing the economy by one-fourth. Unemployment is at 25 percent, and a stunning one in two young workers are without jobs.

In short, there is no hope for huge numbers of Greeks.

With unemployment so widespread, the tax base has been crushed. With no tax base, it is impossible for Greece to repay its creditors.

The Troiks is now being reminded of an old adage: You can't get blood from a stone.

Posted by The Independent Report at 1:33 PM