Even Greece's Creditors Know It Can't Be Saved 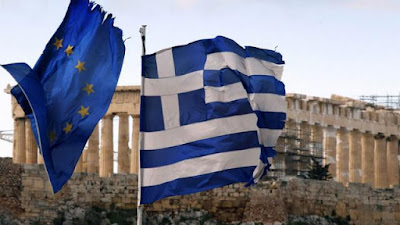 A mere seven days after the Greek people resoundingly rejected the demands of Greece's creditors, 61% to 39%, Prime Minister Alexis Tsipras defied the will of his citizens and capitulated to the Troika — The IMF, EU and ECB.

Tsipras was elected earlier this year on a platform of defiance of the Troika and the austerity measures that have crippled the Greek economy. His party and the electorate may now revolt against him. Tsipras could face a snap election and be quickly booted from office.

His decision is a blatant affront to democracy — the will of the Greek people — and for that he may pay the ultimate political price.

Why the Greek government did not ready and relaunch their former currency, the drachma, is inconceivable. It is their only hope to return to some semblance of normalcy.

Greece needs to leave the euro and devalue its currency to gain some competitiveness in global trade.

Greece is stuck in a nightmarish scenario in which it must borrow from its creditors in order to repay those very same creditors. How insane is that?

The sad reality is that Greece is absolutely, fundamentally incapable of ever paying off its debts, and even its creditors know this.

Secret documents published by The Guardian reveal this:

"Greece would face an unsustainable level of debt by 2030 even if it signs up to the full package of tax and spending reforms demanded of it, according to unpublished documents compiled by its three main creditors.

"The documents, drawn up by the so-called troika of lenders, support Greece’s argument that it needs substantial debt relief for a lasting economic recovery. They show that, even after 15 years of sustained strong growth, the country would face a level of debt that the International Monetary Fund deems unsustainable.

"The documents show that the IMF’s baseline estimate – the most likely outcome – is that Greece’s debt would still be 118% of GDP in 2030, even if it signs up to the package of tax and spending reforms demanded. That is well above the 110% the IMF regards as sustainable given Greece’s debt profile, a level set in 2012. The country’s debt level is currently 175% and likely to go higher because of its recent slide back into recession."

So there you have it; the medicine will only help to kill the patient. It is madness!

The IMF knows the demands made by it and the other two members of the Troika will not help Greece. They will only prolong and deepen its misery. Yet, they are making these demands anyway.

Back to The Guardian:

"Even under the best case scenario, which includes growth of 4% a year for the next five years, Greece’s debt levels will drop to only 124%, by 2022."

Consequently, Greece has no chance of meeting the target of reducing its debt to “well below 110% of GDP by 2022” set by the Eurogroup of finance ministers in November 2012.

If there is no chance, even under the best case scenario, why the charade? Why all the handwringing, public proclamations and outlandish demands by the Troika?

Greece is an economic basket case, and everyone who has followed this story closely for the past five years or so knows this. Back in 2012, I said that the eurozone debt deal would leave Greece permanently indebted.

One way or another, Greece will remain in a depression for quite some time. It's only hope for a better future is to default and return to the drachma.

It won't be easy, and it won't be painless. But at least it offers Greece a ray of hope — a light at the end of a very long, dark tunnel.

Posted by The Independent Report at 3:52 PM