US Economy Remains Weak and Fragile, Despite Massive Fed Interventions 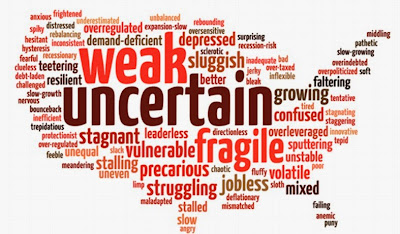 The Great Recession was the worst economic downturn in the U.S. since the Great Depression. In fact, seven years after it's onset, the nation is still trying to crawl out from under the weight of the recession's burden.

Moreover, it was the first quarterly economic contraction in three years, and only the second since the Great Recession ended in mid-2009. The last negative quarter was in early 2011, when growth fell by 1.3%.

So, this contraction was a doozy.

In an effort to help the U.S. along the path to economic recovery, the Federal Reserve is nearly six years into an absolutely massive and unprecedented intervention.

The Fed's quantitative easing (QE) program, initiated in December 2008, has bloated its balance sheet to almost $4.4 trillion. Yet, it is still adding to that absolutely massive sum by buying $45 billion in assets each month.

But that isn't the only extraordinary Fed intervention.

In response to the financial crisis, the subsequent recession, and the collapse in lending/borrowing, the central bank also cut short-term interest rates to historically low levels.

Beginning in December 2008, the Federal Reserve set a target of 0.00 - 0.25% for the Federal Funds Rate, essentially an overnight lending rate for banks. The FFR is presently 0.10%, which allows banks to virtually borrow for free.

Despite these unprecedented central bank interventions, the U.S. economy contracted nearly 3 percent in the first quarter, which was like a kick in the gut.

However, the economy's health has remained weak ever since the recession officially ended.

Since the economic recovery began in mid-2009, annual growth has hovered around 2%, well short of the nation’s historical average of 3.3%. In fact, the U.S. economy has not surpassed 3% annual growth since 2005.

This is rather stunning considering the absolutely massive Fed stimulus designed to re-inflate the economy. The central bank's drastic measures have barely made a difference.

Any hope that we'll reach 3% GDP growth this year has been eliminated.

The International Monetary Fund said the U.S. economy would only grow 2% this year, down from its earlier forecast of 2.8%.

The U.S. economy is driven by consumer spending, which accounts for more than 70% of GDP. Yet, consumers are in no position to be the engine that brings this economy roaring back to life.

Wages and incomes have been stagnant for many years. In fact, household income is roughly the same today, in inflation-adjusted terms, as it was back in 1990. That's why Americans came to rely so heavily on credit during the bubble years.

Credit card debt per indebted household was $17,630 at the end of the first quarter of 2010. However, it has dropped to $15,191 — though it is again on the rise. That four-year decline is substantial.

Meanwhile, overall consumer debt is now 9.1% below its 2008 peak of $12.68 trillion, according to the Federal Reserve.

So, despite all of the Fed's absolutely massive, historic and unprecedented efforts, the economy continues to limp along — now threatening to fall back into recession again — and consumer debt remains well below the level that tanked the economy in the first place.

And therein lies the problem: Ours is a debt-based economy, and without continually expanding debt at all levels — consumer, corporate and government — there can be no return to what was once thought of as "normal."

In short, there can be no growth without debt. However, in light of what happened to the U.S. economy in 2008, perhaps that is a good thing.

Debt is a double-edged sword.

If managed correctly — and kept at levels that allow investment, growth and practicable repayment — it is a useful tool.

If not, it is a financial burden that can tank an entire economy.

We've already seen how that story plays out.

The takeaway here is that the Federal Reserve has already taken massive, extraordinary, and rather drastic measures to get the economy out of recession and resume vigorous growth.

Yet, their nearly six-year efforts are now failing, and that is a frightening reality.

Posted by The Independent Report at 11:35 AM