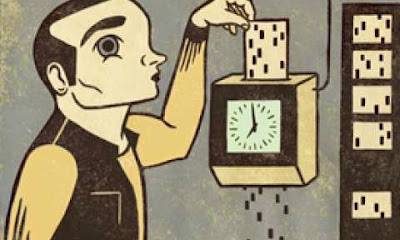 The good news from the latest Bureau of Labor Statistics (BLS) report was that the U.S. economy added 217,000 jobs in May.

This means the U.S. labor market has finally surpassed its pre-recession level of employment (last seen in December 2007), making this the longest employment recovery in the postwar era.

Think about how much damage the Great Recession caused to our economy; it's taken 6 1/2 years to get back to our former employment level.

For example, over this period, the U.S. civilian population increased by nearly 14.5 million people, but the labor force grew by just 1.7 million new jobs, according to BLS data.

However, the "U-6" figure provides a broader measure of the unemployment rate. When this number is viewed, things don't look nearly so rosy.

The "U-6" includes two groups of people not calculated in the "U-3" figure:

1. "Marginally attached workers" — people who are not actively looking for work, but who have indicated that they want a job and have looked for work (without success) sometime in the past 12 months. This group also includes "discouraged workers" who have completely given up looking for a job because they feel that they just won't find one.

These are critical distinctions that make "U-6" a far more accurate representation of true unemployment.

The U-6 unemployment rate was 12.2 percent in May, according to the Bureau of Labor Statistics (BLS). That's nearly twice the 6.3 percent figure most often cited by the government and media.

What this means is that there are 23.5 million Americans who either want a job, or want to work full-time, but can’t due to the weak economy.

That is a massive number.

With 23.5 million people either unemployed or only working part-time, employers can hold the line on wages and salaries.

Over the past year, average weekly earnings have risen 2.1% — about the same as the 2% increase in consumer prices. That has negated the marginal rise in earnings.

Median usual weekly earnings of full-time wage and salary workers, adjusted for inflation, have actually declined since the end of the recession, according to government data.

A significant part of the problem is that this jobs recovery has been too reliant on low-wage jobs. In fact, low-wage jobs have accounted for two-fifths of all new jobs added. 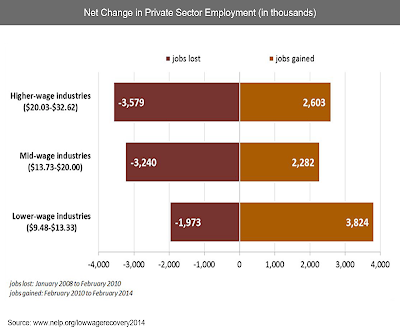 Low wage jobs won't address our economy's fundamental problem, which is a lack of demand. Consumers aren’t consuming enough to spur the economy because they don't have the means to do so.

So, while finally recovering all the jobs lost in the Great Recession is certainly good news, it's clear that we need millions of additional jobs — specifically good-paying, middle-class jobs — before we can really celebrate, or think we've returned to anything resembling "normal."

Posted by The Independent Report at 2:51 PM