Some Stunning Facts About the U.S. Economy 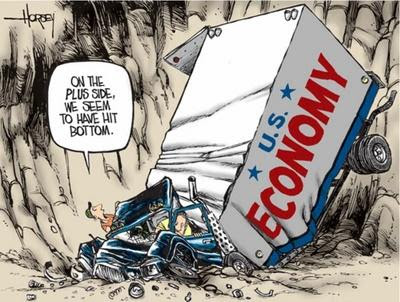 • The federal government continually runs a massive budget deficit. The current deficit is equal to about 10% of the nation’s GDP, a dangerously high level.

• In Fiscal 2011, the U.S. government borrowed roughly 36 cents for every dollar spent.

• A Congressional "super committee" was assigned to make $1.2 trillion in budget cuts over 10 years. The total amount on the chopping block is equal to less than one year’s deficit. Despite this, the committee still failed to agree on cuts.

• Some 43% of federal expenditures go toward health and social security programs. This slice of the spending pie is expected to rise to 51% of total expenditures by 2016. Unless something happens that suddenly disrupts this upward spiral, these two parts of the fiscal budget will bankrupt the country.

• The nation’s real unemployment rate, which includes idled workers who’ve given up looking for jobs, is 22.6%.

• According to RealtyTrac, there have been 8.9 million homes lost to foreclosure since 2007, the height of the credit crisis.

• There are approximately 48 million homes with a mortgage. This means that more than 18% of the nation’s homes have been lost to foreclosure since 2007.

• More than $10 trillion in home equity has been wiped out since the June 2006 peak.

• Nearly a quarter (22.1 percent) of all residential properties with a mortgage were in negative equity at the end of the third quarter of 2011.

• The poverty rate is more than 15%, and another 20% of the population is struggling on incomes near the poverty line.

• Some 18% of the nation’s GDP is spent on health care — twice as much as in other developed economies. Yet, all that health care spending hasn’t produced a healthier population. The United States actually fares worse than other developed countries in areas such as life expectancy, diabetes and cardiovascular disease.

• According to an AFL-CIO report, salaries for big U.S. company CEOs have jumped to 343 times the average pay for their own employees, up from 42 times in 1980.

• According to the Washington Post, since the 1970s, median pay for executives at the nation's largest companies more than quadrupled even after adjusting for inflation. Yet, during the same period, pay for non-supervisory workers has dropped more than 10 percent.

The U.S. government is highly dysfunctional and ineffective. Politicians don't work for ordinary citizens, but rather for the Corporatocracy that now controls the nation.

Meanwhile, the U.S. has increasingly become a land of tremendous inequality, with huge swaths of the nation having lost even the hope of the American dream.

The middle-class has been virtually lost and an entire generation of Americans do not, and will not, have the quality of life or economic freedom of their parents.

This is truly a sad state of affairs.

Posted by The Independent Report at 12:01 AM