Class of 2013 Facing Considerable Challenges Ahead 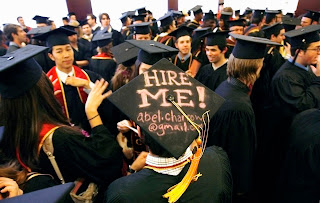 This spring, millions of college students across the country are celebrating the annual rite of commencement. They will leave behind their textbooks, classrooms and weekend beer bashes to begin seeking full-time employment.

Yet, even as they are graduating into the adult world, many of them will end up unemployed and living back at home with their parents. As of 2011, 45 percent of recent college graduates were living with family instead of on their own. And a full 61 percent more college-educated 18-34-year-olds were living with their families in 2011 than in 2001.

The struggle to find work is driving this so-called "Boomerang Generation" back home with their parents instead of striking out on their own to begin an independent adulthood.

As of this time last year, 53 percent of recent college grads (those under age 25) were unemployed or under-employed (working in jobs that don't require a bachelor's degree), according to the Associated Press (AP).

It's clear that not much has changed in the past year and the class of 2013 will be facing similarly stark prospects as they compete with other recent graduating classes for full-time employment.

As the AP notes, recent graduates are now more likely to work as "waiters, waitresses, bartenders and food-service helpers than as engineers, physicists, chemists and mathematicians combined."

The fact that so many young college graduates can only find employment in such low-paying jobs is particularly troubling since student loan debt has reached $1 trillion dollars, eclipsing credit card debt for the first time in American history. It is the new American credit bubble. Yet, the problem appears poised to worsen.

Last fall, a record 21.6 million students were expected to attend American colleges and universities, constituting an increase of about 6.2 million since fall 2000, according to the National Center for Education Statistics (NCES).

Record college enrollments have been driven in part by both increases in the traditional college age population and rising enrollment rates. Between 2000 and 2010, the 18- to 24-year-old population rose from approximately 27.3 million to approximately 30.7 million. Meanwhile, the percentage of 18- to 24-year-olds enrolled in college also was higher in 2010 (41.2 percent) than in 2000 (35.5 percent).

Unfortunately, all those millions of students are piling up a whole lot of debt.

According to the Federal Reserve Bank of New York, student debt has grown dramatically over the last decade — some 43 percent of Americans under the age of 25 had student debt in 2012, with the average debt burden now $20,326. By contrast, back in 2003, just 25 percent of younger Americans had debt, and the average burden was $10,649.

For the 2010–11 academic year, the average annual price for undergraduate tuition, fees, room, and board was $13,564 at public institutions (including $5,076 for in-state tuition) and $32,026 at private, not-for-profit and for-profit institutions.

College tuition and fees have surged 1,120 percent since records began in 1978 — four times faster than the increase in the consumer price index.

Cumbersome tuition debt has put young graduates at a significant disadvantage when they are attempting to begin their adult lives. Large student loan debts delay their ability to create families, buy a first home, or start businesses.

Recent college grads are confronted by the double-whammy of huge tuition debts (which many of them will carry for at least a decade) and the prospects of low-paying jobs — assuming they can find one at all. Servicing student loan debt with a low-wage job is the sort of thing that drives young graduates back home to live with their parents and it is limiting household formation.

The household growth rate was cut by two-thirds between 2007 and 2010 compared to the previous 10 years, according to the Cleveland Federal Reserve Bank. The downturn was directly related to poor economic conditions and it occurred despite the fact that the population was steadily increasing each year. This has negatively affected the housing market, as lower household formation rates reduce housing demand.

However, young people who can't find jobs aren't the only ones facing a struggle. Those fortunate enough to be employed are suffering from falling wages.

Between 2000 and 2011, the real (inflation-adjusted) wages of young college graduates declined by 5.4 percent. For those with only a high school diploma, the wage decline was even worse over that period, falling 11.1 percent.

Many of those fortunate enough to be employed are working at jobs well below their education level that don't require a college degree. It's no wonder that many young people have begun to question the value of a college education.

According to government projections released in March of 2012, only three of the 30 occupations with the largest projected number of job openings by 2020 will require a bachelor's degree or higher to fill the position — teachers, college professors and accountants. Most job openings are in professions such as retail sales, fast food and truck driving — jobs that aren't easily replaced by computers.

None of this is good for the economy or the future of our country.

According to the Census, the number of Americans under the age of 25 with at least a bachelor's degree has grown 38 percent since 2000. Yet, not nearly enough jobs have been created to accommodate them, which has resulted in the falling wages young college graduates have endured over the past decade, as well as the perennial employment problems we're now confronting.

When a college grad is unemployed for a long stretch, or working in a low-wage job that doesn't require a college degree, it hurts future employment prospects. Trying to explain long employment gaps on one's resume to a potential employer can be difficult. Worst of all, it can have long lasting economic consequences, restricting income for the rest of one's working life.

According to a new analysis by the Center for American Progress, the nation's stubborn unemployment problem will cost young Americans a staggering $21.4 billion in earnings over the next decade.

Sadly, the joy and ebullience associated with graduation may be short-lived for many of this year's college graduates, as it was for each of the classes that graduated into an uncertain world since the Great Recession scarred this nation.

This year's class will enter adulthood burdened by high student loan debts, poor job prospects and low wages. That will keep many of them from forming their own households and participating in the broader economy in the way that previous generations of college grads did.

Instead, many in the class of 2013 will be returning to their parents' houses in what will feel like their high school years all over again. Many will surely question why they bothered incurring so much school debt in recent years, debt that will undoubtedly hinder them for many years to come.

Worst of all, their job prospects may not be all that better than their peers who didn't go to college, which will make servicing hefty school loans all the more challenging.

Posted by The Independent Report at 1:13 PM